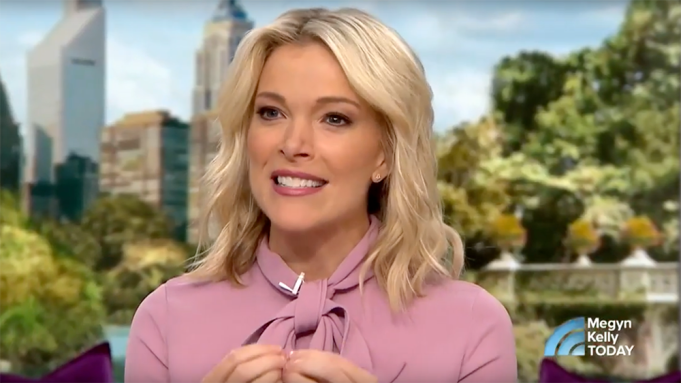 Megyn Kelly hasn’t been shy about turning recent controversies at NBC News into fodder for her morning program at the network. Now NBC News is doing much the same with a blunder she made on her show Tuesday.

Both “NBC Nightly News” and “Today” have aired segments examining statements Kelly made Tuesday on her 9 a.m. program, “Megyn Kelly Today,” about dressing up in blackface or whiteface for Halloween. “What is racist?” she asked a panel that included Jenna Bush Hager, Jacob Soboroff and Melissa Rivers. “You do get in trouble if you are a white person who puts on blackface for Halloween, or a black person who puts on whiteface for Halloween. Back when I was a kid, that was okay just as long as you were dressing as a character.”

A visibly emotional Kelly opened her broadcast Wednesday with an apology. “I want to open with two words: I’m sorry.” She added that she had no intention of adding to anyone’s pain over a deeply felt issue.

Kelly went on: “The country feels so divided and I have no wish to add to that pain and offense. I believe this is a time for more understanding, more love, more sensitivity and honor. Thank you for listening and for helping me listen too.”

Her remarks come after she released a statement Tuesday. “Today is one of those days where listening carefully to other points of view, including from friends and colleagues, is leading me to rethink my own views,” she wrote. “I’ve never been a ‘pc’ kind of person — but I understand that we do need to be more sensitive in this day and age. Particularly on race and ethnicity issues which, far from being healed, have been exacerbated in our politics over the past year. This is a time for more understanding, love, sensitivity and honor, and I want to be part of that. I look forward to continuing that discussion.”

Talk is likely to continue.

Kelly opened her show Wednesday  with a panel discussion with two African-American analysts, Amy Holmes and Roland Martin, who explores the troubling history of black face. “I can play Diana Ross. I’m sorry Megyn, you can’t,” said Holmes, making a reference to a remark Kelly made yesterday about a white actress dressing as the singer.

” I have been listening. And learning. And I’m grateful to have this conversation on set,” Kelly said.

A portion of her live studio audience gave her a standing ovation after her opening remarks.

NBC News correspondent Morgan Radford has been covering the gaffe for both “NBC Nightly News” and “Today.” Her report on Wednesday’s “Today” broadcast on NBC also cited a now-infamous 2013 broadcast on Fox News Channel, Kelly’s former employer, in which she told viewers Santa Claus “is just white.” In a five-minute segment on the NBC morning program, a good portion of the show’s best-known anchors  – including Al Roker and Craig Melvin – weighed in on the statements. critically.

“The fact is, while she apologized to the staff, she owes a bigger apology to folks of color around the country,” said Roker, one of the show’s longest-tenured hosts. “She’s a friend. She said something stupid. She said something indefensible,” said Melvin. Roker added: “You know – you know – that no good comes from it,” referring to the discussion held on “Megyn Kelly Today” yesterday. Roker has not been shy in the past about calling out colleagues for on-air mistakes

The morning program has been a work in progress. At times, it has garnered  good notice for Kelly’s willingness to examine tough issues and the #MeToo social-justice movement. She did not shy away from a discussion about the late-2017 ouster of Matt Lauer after NBC News found allegations of sexual harassment levied at him. The anchor has denied some of the charges made against him.

In other instances, however,  the show has brought unwanted scrutiny, such as when Kelly criticized actress Jane Fonda’s record on Vietnam. Viewership for “Megyn Kelly Today” has stabilized, but it is below what NBC previously got for the 9 a.m. hour of “Today,” which was hosted by Tamron Hall, Roker, Willie Geist and Natalie Morales.