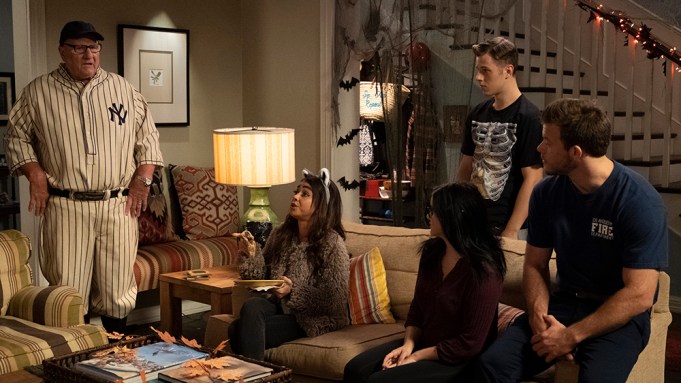 “Modern Family” wasted no time during its Wednesday episode for the long-awaited reveal of which character would die in the Halloween-themed episode of the 10th season.

Within minutes, Claire Dunphy (Julie Bowen) gets a call from her stepfather to tell her that her mom DeDe has passed away. However, a fun Halloween night is just what Claire and Mitchell needs to distract herself from the sad news (in addition to drinking), while their spouses Phil (Ty Burrell) and Cam (Eric Stonestreet) try their best to cheer them up.

The Dunphy kids also deal with the news in their own unique ways. Luke (Nolan Gould) makes jokes about his grandmother coming back as a zombie, Hayley (Sarah Hyland) gorges on Halloween candy to cope, and Alex (Ariel Winter) has a surprising, out-of-character reaction.

There were also plenty of laughs in the heartfelt episode, from the costumes, such as Cam dressing up as Megan Markle, to poorly-timed announcements (the “Welcome to Hell” doorbell comes on right as they’re about to say DeDe is in a better place). The somber occasion is humorously juxtaposed by their silly costumes, most evident when Claire struggles with her spider outfit to hug her brother Mitchell dressed as Prince Harry.

DeDe Pritchett (Shelley Long) was Jay’s first wife, and in her numerous appearances was depicted as having a complicated relationship with her children. It was previously shown that DeDe was accepting when Mitchell first came out, while she was also often cruel to Claire about her appearance and perceived poor choices.

The show’s co-creator Christopher Lloyd told EW in September that a “significant character” will die and it “will be a moving event — an event that has repercussions across several episodes.”

“We do deal with a death, which is certainly a topic that families have to deal with, and on television, it’s not easy to do because that’s a heavy subject,” Lloyd said. “But at the same time, it would seem unusual for a family not to go through it.”

Hyland previously told Variety that she would be fine with a death in the family as long as it wasn’t Stella, the family’s beloved french bull dog.

“‘If the dog dies, I leave,’” she said at the Women in Film and Variety’s annual Emmy nominee party. “I’m that person that watches ‘The Walking Dead,’ and I’m like ‘feed the zombie the baby before the dog.’ I’m a horrible person I know, but I just love animals so much.”

While it has not been confirmed, it’s been rumored that the show will go on with a shorter 11th season, with a final season of about 18 episodes. The series, which began in 2009, is ABC’s longest-running comedy series and has won a record-tying five consecutive comedy series Emmys.