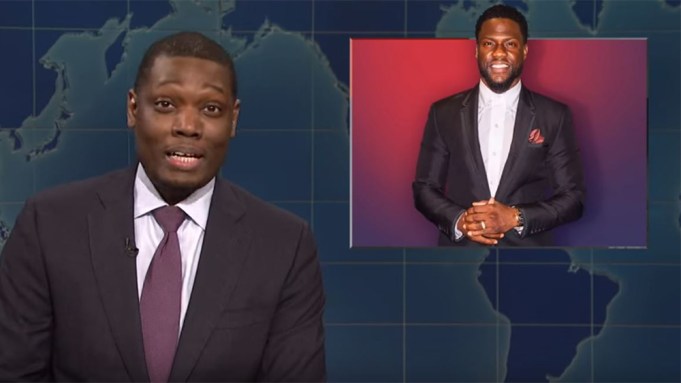 Kevin Hart may have alienated some in Hollywood over his recently resurfaced homophobic tweets, but that didn’t stop “Weekend Update” co-host Michael Che from cracking some jokes in support of Hart on Dec. 8’s “Saturday Night Live.”

After briefly recapping that Hart stepped down from hosting the Oscars after the 2011 tweets came to light, Che called out the Academy for awarding another controversial Hollywood denizen.

“Didn’t the Academy nominate Mel Gibson for an award just last year?” Che asked. Gibson, who has repeatedly come under fire since the early ’90s for using racist and homophobic epithets, was nominated for an Academy Award for best director for “Hacksaw Ridge” in 2017. Similarly to Hart, Gibson refused to apologize after a 1991 interview in which he made derogatory comments about homosexuals.

“Also, if Kevin Hart isn’t clean enough to host the Oscars, then no black comic is,” Che remarked. “The only black comic I know that’s cleaner than Kevin Hart is booked for the next three to 10 years,” he said, as an image of Bill Cosby appeared on the screen, prompting shouts from the audience.

Hart’s resignation from hosting duties came after a saga of events that kicked into overdrive when, in an Instagram video, Hart refused to apologize for the tweets. Hours later, Hart resurfaced with another video stating that the Academy of Motion Picture Arts and Sciences had given him an ultimatum: Apologize or we’ll find a new host — and that Hart had chosen to pass on the apology. Less than two hours later, Hart announced via Twitter that he was removing himself from the gig, and he finally offered the apology everyone was looking for.

Watch the “Weekend Update” segment above.