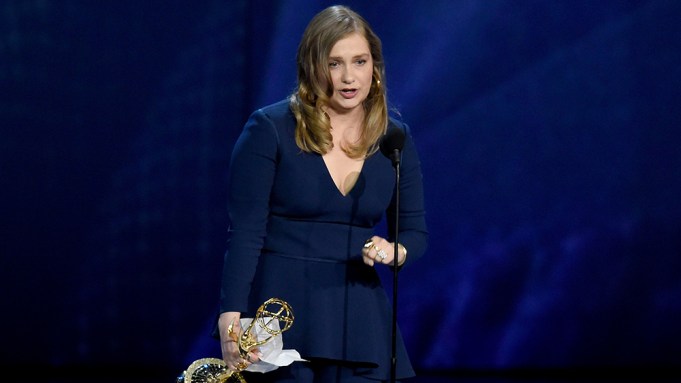 Merritt Wever has won the trophy for best supporting actress in a limited series or movie at the 2018 Emmy Awards, which were held Monday night at the Microsoft Theater in Los Angeles.

Last year’s winner was Laura Dern, who was recognized for her work in HBO’s “Big Little Lies.”

This is the second Emmy win for Wever, who played trouser-wearing widow Mary Agnes McNue in the western. She won in 2013 as best supporting actress in a comedy for Showtime’s “Nurse Jackie,” where she famously gave an 11-word acceptance speech, simply thanking the crowd. She also earned a SAG nod as part of the “Nurse Jackie” ensemble.

Backstage, Wever said “Godless” is expected to stand as a one-season-and-done limited series, unlike other projects that have found a way to keep going after gaining traction with viewers.

” ‘Godless’ was originally a feature that Scott (Frank) wrote, so he’s already expanded it and expanded the world, so I don’t see that happening,” she said. “It’s certainly not my call but it was never conceived to be an ongoing thing. And I think he did a lovely job of creating a world that people want to see more of but that (can) live as is.”