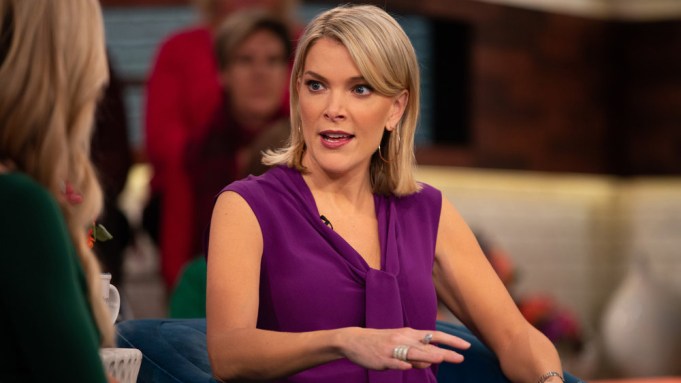 Since joining NBC News in the Spring of 2017, Megyn Kelly has soldiered on at her morning program, “Megyn Kelly Today,” through various social-media controversies; a feud with actress Jane Fonda; scrutiny of her ratings, her guests, her dancing, her everything. Her hard work has been testament to her ability to take a punch and keep working to build an audience.

Now there’s some question about whether Kelly can keep marching.

The Tuesday broadcast of “Megyn Kelly Today” has spurred sentiments of disappointment from media buyers, the executives who allocate billions of dollars of advertising to media properties on behalf of Madison Avenue. Kelly blundered yesterday during a panel discussion on her 9 a.m. program when she made some remarks about dressing up in blackface or whiteface for Halloween. “What is racist?” she asked a panel that included Jenna Bush Hager, Jacob Soboroff and Melissa Rivers. “You do get in trouble if you are a white person who puts on blackface for Halloween, or a black person who puts on whiteface for Halloween. Back when I was a kid, that was okay just as long as you were dressing as a character.”

The conversation generated swift backlash, and Kelly, visibly emotional, offered an apology Wednesday. “I’m Megyn Kelly and I want to begin with two words — I’m sorry,” she said. “I believe this is a time for more understanding, more love, more sensitivity and honor and I want to be part of that. Thank you for listening and for helping me listen, too.”

One media buyer suggested the incident offered a reminder of why the program has proven disappointing. “It has not gone as hoped and the downward spiral has only accelerated,” said Ira Berger, who supervises ad buying on broadcast and cable for The Richards Group, an independent Dallas ad agency, and who had previously expressed optimism about the program. Another buying executive, who declined to be identified by name, suggested the viability of the program – it has largely drawn a smaller audience than the hour of “Today” it replaced in the fall of 2017 – had been in question before this week’s broadcasts. “The show never lived up to the hype in the first place,” said a third buying executive, who also declined to be identified.

None of the buyers suggested clients were pulling money from the show at this time.

NBC News Chairman Andrew Lack addressed the controversy at a town hall meeting of news staffers Wednesday – scheduled before this week – according to people present. “I assume all of you by now have seen the remarks that she made on her show yesterday about Halloween and blackface. There is no other way to put this but I condemn those remarks, there is no place on our air or in this workplace for them. Very unfortunate,” Lack said. He added: “As we go forward, my highest priority remains, and as we sort through this with Megyn, let there be no doubt that this is a workplace in which you need to be proud and in which we respect each other in all the ways we know is foundational to who we are.”

NBC News declined to make executives available for comment. Kelly could not be reached for immediate comment.

Despite the sentiments, ad dollars have improved for NBC in the “Megyn Kelly Today” hour. In the first six months of 2018, “Megyn Kelly Today” lured nearly $65.8 million in advertising, according to Kantar, a tracker of ad spending. That represents a more than 26% jump from the year-earlier period, when the third hour of “Today,” hosted by anchors such as Tamron Hall, Willie Geist, Al Roker and Natalie Morales pulled in nearly $52 million.

Both “NBC Nightly News” and “Today” have aired segments examining the statements she made, coverage Lack praised at the meeting. On Wednesday’s broadcast of “Today,” a large number of the show’s team discussed the Kelly incident in a five-minute segment, with Al Roker and Craig Melvin weighed in on the matter. “The fact is, while she apologized to the staff, she owes a bigger apology to folks of color around the country,” said Roker, one of the show’s longest-tenured hosts. “She’s a friend. She said something stupid. She said something indefensible,” said Melvin. Roker added: “You know – you know – that no good comes from it,” referring to the discussion held on “Megyn Kelly Today” yesterday.

More appears to be on the way. Morgan Radford, an NBC News correspondent who appeared recently in the panel segment that regularly opens Kelly’s show, has been reporting on fallout from the incident. She said on Instagram Wednesday that she expected to continue to cover the story.

The relationship between anchor and NBC may have been tested by the intense, near-constant public examination, said one person familiar with the network. This person suggested that both NBC News executives and Kelly have at times seemed “exasperated” with each other.

Kelly always represented a big bet for NBC. Her salary, said to hover at $17 million or more per year, has long drawn attention. But it’s also the result of NBC needing to lure her away from Fox News Channel, where The Wall Street Journal reported she was drawing $15 million annually. The NBCUniversal network no doubt thought Kelly, who rocketed to stardom at Fox News, would draw new audiences to its daytime schedule at a time when conservative opinion was in power in Washington (Kelly has always maintained that she is an independent who calls things as she sees them, part of her appeal at Fox).

Success in daytime TV has always been tough to come by. Other famous anchors have tried their hand in mornings and afternoons in the recent past, and met with middling success. Katie Couric, Anderson Cooper and Meredith Vieira are among the personalities who tackled daytime talk programs in the last few years. All three lasted just two seasons before ending their respective efforts.

“Megyn Kelly Today,” due to so much scrutiny, perhaps, has been a work in progress. At times, it has garnered good notice for Kelly’s willingness to examine tough issues and the #MeToo social-justice movement. She did not shy away from a discussion about the late-2017 ouster of Matt Lauer after NBC News found allegations of sexual harassment levied at him. The anchor has denied some of the charges made against him. In other instances, however, the show has brought unwanted attention, including Kelly’s scolding of actress Fonda.

Kelly does have some support. After she delivered her apology on Wednesday’s broadcast, a swath of her live, in-studio audience rose to their feet and gave the anchor a standing ovation.