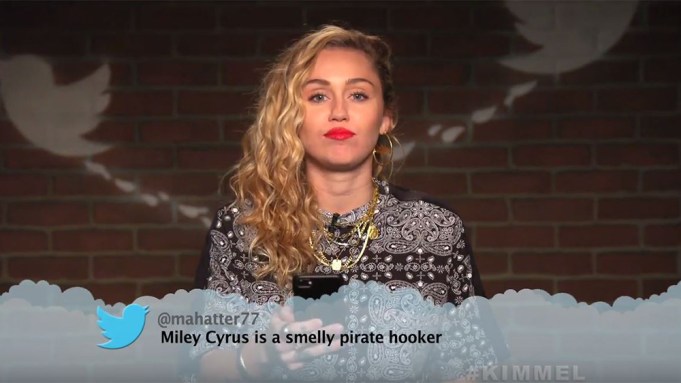 With the traditional “Everybody Hurts” by R.E.M. playing in the background, the segment featured appearances from Halsey, Imagine Dragons, Dua Lipa, Jason Derulo, Schoolboy Q, Luke Bryan, The Chainsmokers, and many more.

“One of my employees was talking about how the Chainsmokers are actually pretty good and don’t deserve all the hate. So I fired him,” wrote one user, prompting laughter from the DJ duo.

“Pink is aging pretty well for a pig.” Ouch. The singer replied, “Thank you!” while crossing her eyes.

“I would rather stab myself in the taint than hear another Nickelback song,” one user tweeted. “That’s funny — that’s how we make Nickelback songs,” deadpanned Chad Kroeger.

“Shoutout to Schoolboy Q, he uglier than a motherf—er,” commented one user. “For sure I am,” the rapper said.

“G-Eazy is like the American cheese of cheese. Or like the boxed wine of wine. Or some other s—ty thing,” the rapper read out.

Kimmel’s “Mean Tweets” segment originated back in 2012, and has expanded to include numerous music editions, as well as NBA basketball and NFL editions.