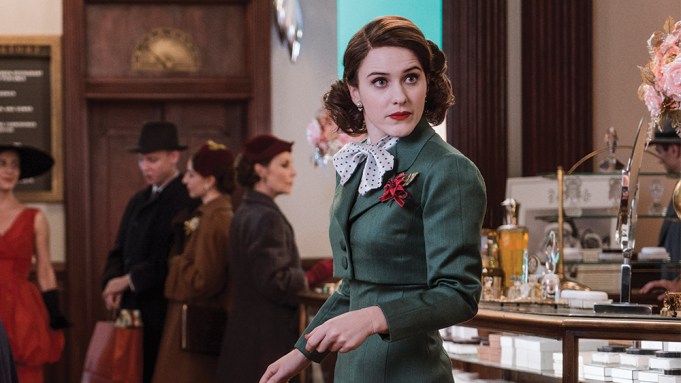 The “mad divorcee” of the Upper West Side is back.

Amazon has just released the trailer for the Emmy-nominated comedy’s second season, and Midge Maisel — newly single, but as irreverent as ever — isn’t slowing down one beat.

The trailer begins with a mother-daughter conversation at a salon, side-by-side flipping through magazines as they’re getting their hair done. But in true “Marvelous Mrs. Maisel” fashion, it quickly becomes anything but a benign chitchat.

“So, are you dating?” asks her mother.

Then, as Judy Garland’s “Get Happy” plays in the background, we see Midge in her element — delivering snappy one-liners (“If that’s not a deterrent for nuclear war, I don’t know what is”), playing with her kids, dancing with her ex (!), and yes, heading to the Catskills.

The sneak peek ends with Midge getting ready to head back onstage, alongside her manager, Susie (Alex Borstein), who offers her a pep talk with two words: “Tits’ up.”

The cast of “Maisel,” which also includes Tony Shalhoub (Abe Weissman) and Michael Zegen, is written and executive produced by Amy Sherman-Palladino and Daniel Palladino. It earned 14 Emmy nominations, including outstanding comedy series, directing, writing, and acting noms for Brosnahan, Shalhoub and Borstein.

To support the show’s Emmy efforts, Amazon is planning “Marvelous Mondays” on August 13, 20, and 27, taking over select areas of Los Angeles with giveaways and Midge Maisel look-a-likes coloring the city in pink. There will also be an outdoor screening on August 9 at Hollywood Forever cemetery of two episodes from season 1, along with a sneak peek of season 2. Once again, the theme is everything pink, including a costume contest.

Season 2 will debut later this year.