Continue to Variety SKIP AD
You will be redirected back to your article in seconds
Jul 12, 2018 12:59pm PT

Emmys: How ‘Marvelous Mrs. Maisel’ Broke Through With Voters 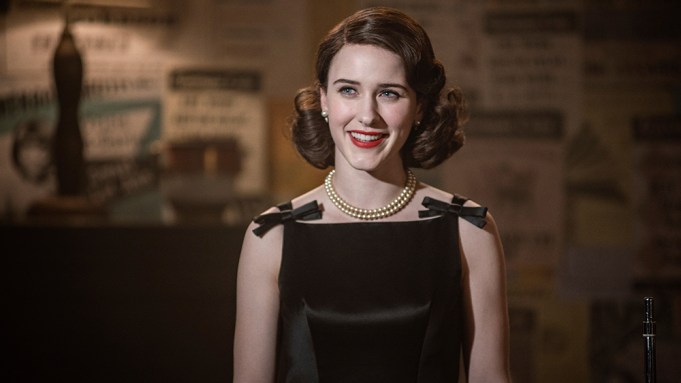 While Netflix claimed bragging rights with a chart-topping 112 nominations, its streaming rivals also made their mark on the field: Hulu grabbed 27 nods, and Amazon made an impressive showing with 22 nominations (up from 16 last year) — fueled largely by its period comedy “The Marvelous Mrs. Maisel,” which scored 14 nominations.

“We are extremely proud that the Television Academy honored so many of our talented actors, creators, and craftspeople across a number of Amazon series,” said Jennifer Salke, head of Amazon Studios. “It’s truly a Marvelous day!”

The show, about an Upper West Side housewife who ventures into standup comedy after her picture-perfect marriage falls apart, scored with wins for comedy and lead actress at the Globes as well as a Peabody Award. It was also a critical favorite, scoring a 95% fresh rating on Rotten Tomatoes and an 80 score on Metacritic. “’Mrs. Maisel’ bristles with an energetic sense of discovery, and Rachel Brosnahan is flat-out fantastic in the title role,” wrote Variety‘s TV critic. That success fueled an early season 3 renewal, even ahead of the show’s second season premiere.

Amy Sherman-Palladino, who created and executive produces the show alongside her husband, Dan Palladino, tells Variety that the 14 total nominations reflect the hard work of the show’s cast and crew. “We have a lot of really hardworking, brilliant people over here who have not slept in in a year and a half for us,” she says. “We’re very happy that all their work has been really acknowledged. Everyday we show up and there’s nothing but skirts and crinolines as far as the eye can see running around.”

The Palladinos — who also created “Gilmore Girls” — joke that they’re even claiming “full credit” for Alexis Bledel’s nod for “The Handmaid’s Tale.” “It’s a real thrill for us because we couldn’t get the damn ‘Gilmore Girls’ there, but we’ve made up for it with this one,” jokes Dan Palladino. “The [voters] are actually thinking Rory, they’re not thinking Emily.”

The producers credit the support of Amazon, which has faced some struggles creatively before the arrival of Salke to head its programming. “It was a financial gamble for them and it was an experiment for us because we had never done anything this big,” says Dan Palladino. “And I think [these nominations] certainly validate that.”

Adds Sherman-Palladino, “if you have a very specific creative vision and you want someone to really have your back, it signals that because it’s been a great ride there,” she says.

They also credit the awards campaign, which filled the streets of Los Angeles and subways in New York City with hot pink billboards, as well as ads for “Susie Myerson,” Borstein’s manager character. “They weren’t self serious, which we were really interested in avoiding,” says Dan Palladino. “We saw them a lot in the subway, and I only saw one disfigured. I happen to know it was just disfigured by Alex Borstein, who disfigured her own poster.”

They joke that this success will only make the notoriously meticulous duo even more “impossible” to deal with. “It’s everybody’s worst nightmare,” she says. “They should just be sobbing and handing out tissue boxes because it’s just a nightmare from here on in.”

The producers say the show has found its audience because of its “entertainingly funny” tone — a welcome respite from the relentless negative headlines. “The world is ending basically,” says Sherman-Palladino. “So why not look at some pretty cars and some great skirts and here’s some fabulous music because it’s all over any minute now. There’s sort of an energetic, breezy, fun, colorful, alternate universe that you can enter for a little while — and then go cry and eat your hair.”

Quips Dan Palladino: “Plus, Eisenhower was the president!”