Margaret Atwood on How Donald Trump Helped ‘The Handmaid’s Tale’ 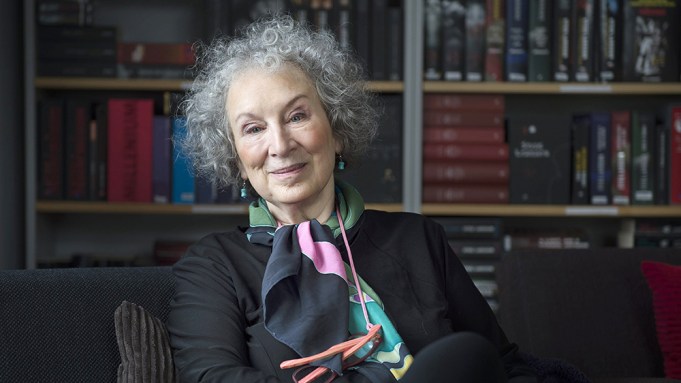 If you think it’s tough for a writer in 2018, imagine how Margaret Atwood felt at the beginning of her career. “It was impossible,” the celebrated author says. “I was starting out in Canada in the 1950s. There was no market. I thought I would have to have a day job.”

Her back-up plan could have made her into the next Danielle Steel. “I thought I’d write true romances,” Atwood says. “But I tried, and I basically couldn’t do it. I was 18, what can I tell you? It bogged down in the middle. I could do the plots, but I couldn’t do the prose. It was in the age of dots. Something happened on the sofa, and then they were …” She pauses. “Dot, Dot, Dot! I couldn’t do that.”

Atwood is one of five honorees at this year’s Variety Power of Women luncheon on April 13. As part of this week’s cover story, Atwood spoke to Variety about the secrets of Hulu’s “The Handmaid’s Tale,” based on her 1985 dystopian classic, how it plays during the era of Donald Trump, and why there should be one definition of feminism.

What are your memories of writing the first draft of “The Handmaid’s Tale?”
I started writing it in West Berlin in 1984. The wall was still in place. Because I was Canadian, we could go across to East Berlin, Czechoslovakia, and Poland, which we did. They were all Iron Curtain countries at the time. That definitely had an influence on the book, most particularly the feeling that people were very reluctant to talk to you until they absolutely trusted you and you were in a place that wasn’t bugged. I had been thinking about this book for a while. I had been collecting newspaper clippings, which one did in those days. There was no internet. So my rule for it was, nothing goes in that didn’t have a precedent in real life — somewhere, sometime.

What was your original title for it?
I was thinking of the title of the central character [calling it “Offred”], but then I thought nobody was going to understand this. I got that name by writing out a bunch of men’s names and putting “of” in front of them, to see which sounds better. And that was the one.

Was the title influenced by Geoffrey Chaucer?
Well, sure. I like Chaucer.

Did you always see “The Handmaid’s Tale” as a feminist story?
What does that mean? Look up types of feminism. You’ll find 50 of them. Did I always see it as a story with women at the center of it? Yes. Does that make it feminist? Yes. But does that make it a particular kind of feminist? There’s no one definition of feminist. That’s why I always ask people which kind do you mean. I don’t sign blank checks, and I’d like to know what I’m signing up for.

Do you think that’s a problem?
It’s a problem because if you say feminist, you’ll find there are a lot of positions that also call themselves feminist that you don’t agree with. It’s like “Christian.” Does that mean the Pope? Does it mean evangelicals? Does it mean Thomas Becket? What are we talking about?

What does feminism mean to you?
It’s not up for me to decide. For me, it means something that is working for women’s equality, and we are a long way from that. And by equality, I mean legal equality, political equality, and social equality.

Why did the movie adaptation of “The Handmaid’s Tale” not work?
The 1990 movie, the screenplay was by Harold Pinter, and it included voiceover by the central character. And then the director, being in a minimalist phase, took it out. I think it would have been better with it in. Natasha [Richardson], who I knew, she expressed to me in rather pissed off terms, she had recorded all the voiceover and tailored her performance against it. It was a lot more like we have now, in which you heard Offred thinking from time to time.

Were you optimistic when they said they were doing a TV show?
I have no control over whether they do a TV show or not. MGM and Danny Wilson went with the original movie contract. When we wrote it back in 1989, the only kind of TV series that was on was basically like “Dallas.” They were soap operas. “Dallas” is a pretty good one. Then web streaming appeared and it created a whole new platform. There was too much story for 90 minutes. That’s another answer to why the movie didn’t work.

Showrunner Bruce Miller has said there could be 10 seasons of “The Handmaid’s Tale.”
Ten sounds like an awful lot to me. But he’s thoroughly invested in it. We need to sit down and talk about how it can be 10.

Has he told you his plan yet?
No, because I don’t think he knows yet. But maybe he does!

How involved are you in the show?
I read all the scripts and I talk to Bruce. They even let me in the writing room, but it was before they had written anything on their big white boards for Season 2.

How is Season 2 different?
I’m not allowed to talk about it.

Have you seen it?
I’ve read all the scripts. I’ve seen episode one. They haven’t finished them.

Did you spend a lot of time with Elisabeth Moss before they started filming?
Not really a lot. It was mostly Bruce. They were in the middle of shooting the first season when the election happened. They woke up the next morning and said, “We’re a different show.” Nothing about the show changed, but the frame changed.

Netflix had originally turned it down.
I guess they didn’t think it was time yet. If, for instance, Hillary had won, people would have said, “Dodged a bullet! This isn’t going to happen.”

If Hillary was president, would the show not have worked?
It would have worked as a show, but it wouldn’t have worked the same way. Of course not. You always view these things through the lens of events that have taken place. Charles Lindbergh seemed like a possibility for president of the United States in the 1930s. But in 1942, he wasn’t anymore. Why? Because the United States was in World War II and he was a fascist.

Were you surprised that Trump was elected?
I’m too old to really be surprised. Think of how long I’ve been on the planet. I’ve seen a lot of regime changes in different countries. The people who were devastated were young people who had never experienced anything of the kind. And some of them were quite upset. But it’s not the end of the world, although it’s pretty bad for the environment.

You attended one of the women’s marches last year. What do you make of this latest wave of activism?
Typically, waves are waves. They hit the shore and then they recede and then they hit the shore again. How many backlashes have we been through? We used to have a race going on, to see which would win, between “1984” and “Brave New World.” It looked as if “Brave New World” had won. That turned out not to be true. Just to give you a very creepy feeling, there was an opera of “The Handmaid’s Tale” that premiered in Denmark in 2000. It started with a film reel going across the top of the stage and showing various things blowing up. And one of the things that blew up was the Twin Towers. But it hadn’t blown up yet. They did the opera again, and they had to take it out, because it was no longer in the future. Does that give you a creepy feeling?

Yes, it does.
They didn’t get that idea from my opera, don’t worry. They got the idea from “Star Wars.”

Do you really believe that?
Remember the first one? Two guys fly a plane in the middle of something and blow that up? The only difference is, in “Star Wars,” they get away. Right after 9/11, they hired a bunch of Hollywood screenwriters to tell them how the story might go next. Sci-fi writers are very good at this stuff, anticipating future events. They don’t all come true, but there are interesting “what if” scenarios.

Do you have many abandoned novels?
Two major long ones that I did. They were structurally impossible. It was stupid of me to have attempted to do that thing I was attempting to do. For one, I was 200 pages in. I was interested in the people. But I had 200 pages and nothing had happened.

Are you not a good speller?
I’m a terrible speller. A lot of writers spell by ear, but that isn’t how the English language works.

Were you always bad?
I could spell fairly complicated words. I would screw up on words like “weird.” I still have to think about that. It’s “e” before “i” because otherwise it would be “wired.”