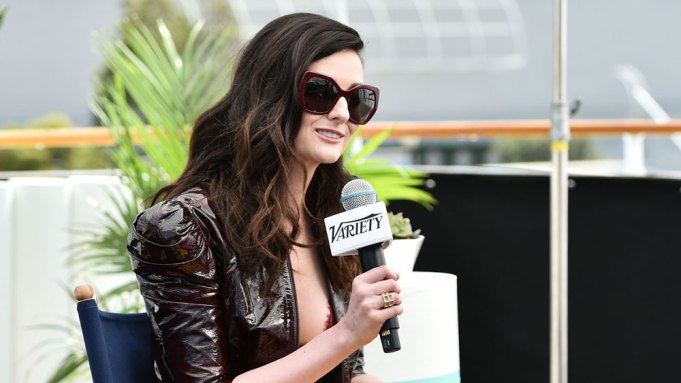 Lydia Hearst defended her husband, “Talking Dead” host Chris Hardwick, at Variety’s Comic-Con Studio on Thursday morning amidst allegations from his ex-girlfriend, actress Chloe Dykstra, that he sexually and emotionally abused her during their relationship, which ended in 2014.

“I’ve known him to be nothing less than absolutely loving, compassionate, supportive, not just to myself, but to everyone he knows and works with,” Hearst, who is at Comic-Con promoting her new character Pandora from “Z Nation,” told Variety. “He’s a genuinely good man with a good heart.”

Hardwick’s shows are only on hiatus and AMC is conducting an investigation into the matter and she and Hardwick are both “extremely optimistic about” the result, she said.

“I think fans can expect to see him back on the air soon and maybe hopefully back at Comic-Con next year,” Hearst said.

The allegations stem from an essay Dykstra wrote for Medium in which she detailed a controlling relationship with restrictions on when she could go out and who she could befriend. After the breakup, she said Hardwick and an unidentified female colleague worked to get her blacklisted throughout the entertainment industry.

Although she never directly named Hardwick, Dykstra described the boyfriend in details that made it clear whom she was referring to.

“The man I married was not the man who was written about in that article,” Hearst said.

Hardwick has denied the accusations and said he was “blindsided” by the claims.

“As a husband, a son, and future father, I do not condone any kind of mistreatment of women,” Hardwick said in a statement in June.