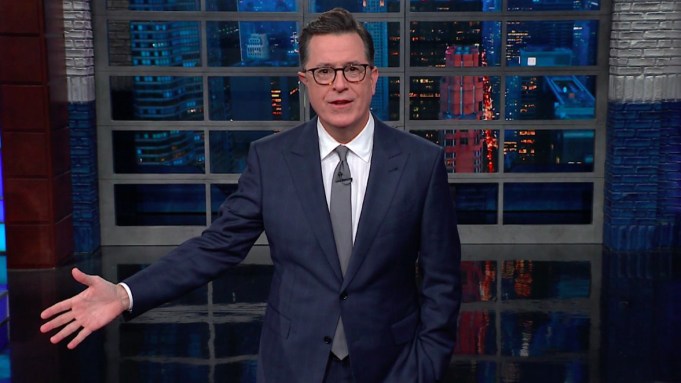 It’s been four days since news broke of a Trump administration policy that has forcibly separated around 2,000 immigrant children from their parents at the U.S. border, and late night talk show hosts have pounced on the controversy, calling the action “monstrous” and “cruel.”

During Stephen Colbert’s “Late Show” monologue on Monday, the host wasted no time digging into President Donald Trump for holding children in Texas detention centers. “Two, four, six, eight, who do we incarcerate?” he chanted in his Trump impression. “Kids!” He also addressed the widespread backlash Trump has faced in the wake of the policy. “Faced with almost universal condemnation from both sides of the political aisle, from religious leaders, from the UN Human Rights council, Donald Trump finally took full responsibility for the policy and promised a swift end to this humanitarian disaster,” Colbert joked before adding, “I’m just kidding.”

The policy also took center-stage during Jimmy Fallon’s “Tonight Show” opener, which drew upon the president’s reputation for controversial treatment of marginalized communities. “Some people said they couldn’t believe Trump would do something like this,” Fallon said. “Then African Americans, Muslims, DACA recipients, transgender troops, and special Olympians were like, ‘We can!’” The host also joined the call for Americans to vote for democratic candidates in the upcoming midterm elections. “The Trump administration is separating immigrant kids from their parents at the border, but experts say there’s an easy fix to the problem: the midterms,” he said.

Among his quips, “Late Night” host Seth Meyers took a moment to set jokes aside and address the topic in a more serious tone. “Trump is doing this as a bargaining chip,” Meyers said. “He’s holding these children hostage so that he can get his border wall.”

“Daily Show” host Trevor Noah’s critique of the policy referenced the outrage that has come from several high profile figures including celebrities, politicians, and Pope Francis. “If even the Catholic Church is judging you for how you treat children, ya done f—ed up,” he joked. Noah also commented on several Fox news clips which described the detention centers as favorable living spaces for the children. “If some guy in an unmarked van took your kids from the park, the last thing you’d be worried about as a parent is how nice the van was or whether they had the good candy,” Noah said.

During a segment of “The Opposition with Jordan Klepper,” Klepper spoke directly to those who supported Trump in the presidential election and members of his administration. “If you voted for the Trump administration or are in the trump administration, you might be feeling a little itch in that fist-side spot between your lungs,” Klepper joked. “And that’s just growing pains — sorry — shrinking pains. You’re working through self-acceptance.”

On “Last Week Tonight,” John Oliver ripped into a viral video clip of Trump, in which the president says he wants the “rules to be beautiful, humane, but strong.” Oliver repurposed the words into a punchline. “Beautiful, humane, but strong?,” Oliver said. “That is not how you describe a law. That’s how you describe a Viola Davis character in a movie called, ‘It hasn’t even been written yet, but she’ll still win the Oscar.'”