Continue to Variety SKIP AD
You will be redirected back to your article in seconds
Jul 27, 2018 6:17pm PT 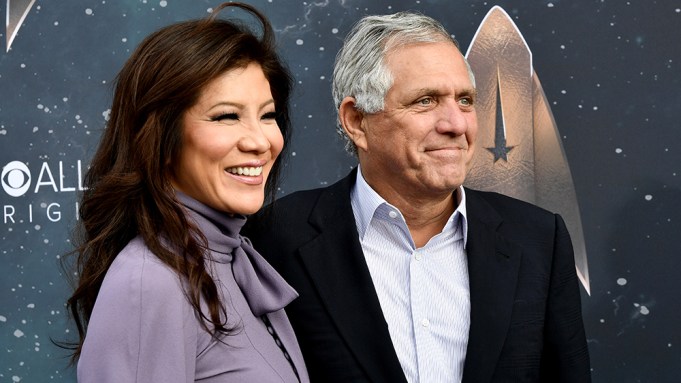 Ronan Farrow’s bombshell investigation into Leslie Moonves’ sexual misconduct allegations could very well lead to the ousting of the chairman and CEO of CBS Corp., where he’s been the chief decision maker for two decades. The scandal is also potentially problematic for news personality Julie Chen, who is both married to Moonves and serves as the host of CBS’ “The Talk” and “Big Brother.”

Until now, the wives of powerful men whose careers have ended as a result of the #MeToo movement have largely been able to stay private and away from the spotlight.

But the situation for Chen is a little different. As evidence: Chen immediately posted a statement on Twitter on Friday night. “Leslie is a good man and a loving father, devoted husband and inspiring corporate leader,” she said. “He has always been a kind, decent and moral human being. I fully support my husband.”

At CBS, some have already started to wonder about the ripple effects the Moonves allegations will have for Chen. A CBS spokesperson didn’t immediately respond to a request for additional comments.

Sources say that Chen’s relationship as both an employee and wife of Moonves could make the coming days awkward for her. She’s scheduled to resume as a co-host on “The Talk” on Monday. Many viewers will be tuning in to see how she reacts, what she has to say and if she continues to stand by her husband, especially if more victims come forward or he is fired by then.

“If Les resigns, what will happen to Julie?” asked one source at a different network, who asked not to be identified speculating about personnel issues. The terms of her contract are not known.

Moonves and Chen have always kept a low profile as a couple, only making appearances together at major industry events like the Golden Globes and the Vanity Fair Oscars party. They often don’t speak about each other in interviews.

They met in the ’90s. At the time, Moonves was the president and chief officer of CBS Television. Chen hosted “CBS This Morning” and “Big Brother,” two programs that he oversaw. They married in 2004, at a private ceremony in Mexico. She was 34, and he was 55, coming off a difficult divorce. The date of their wedding had to be pushed back, because Moonves was still married to his estranged wife, Nancy, during their engagement.

That year, Nancy told the New York Daily News that she didn’t watch CBS. “I don’t want to see [Chen],” she said. “It’s not healthy for me or my kids.” She added: “I felt everybody knew what was going on. And everybody knew. But me.”

Insiders have long whispered that Chen’s relationship with Moonves represented a conflict of interest, since he made decisions about the programming of her shows. In a 2014 cover story with Variety, Barbara Walters made a crack about it as she prepared to leave “The View.”

“I don’t think the success of her show diminishes us, nor do I think the success or failure of ‘The View’ affects them,” Walters said. “The only thing I’ll say is when you’re married to the president of the network, you get more promos.”