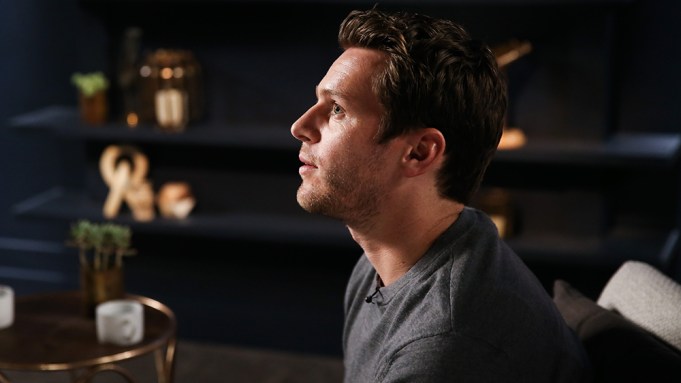 While talking with Maggie Gyllenhaal (“The Deuce”) for Variety’s “Actors on Actors,” presented by Shutterstock, Jonathan Groff (“Mindhunter”) revealed that during the shooting of the 10-episode span of David Fincher’s “Mindhunter,” he fought to include a certain version of a scene.

As he described, as the writers built out his character, they “kept figuring out how they were going to evolve this relationship with Hannah Gross, who plays my girlfriend on the show, Debbie. And they hadn’t written the end of it yet.”

Playing a profiler in the Netflix series, Groff “fell in love with this scene where she’s sitting on the porch and I come back. And I’m like: ‘What’s wrong with you?’ And she says: ‘Well, you’re the profiler. Tell me what’s wrong.'”

Gyllenhaal joked how she had just watched the scene the morning of the interview.

Groff went on to explain how “I kind of profile our breakup. And I thought: ‘This is such a brilliant scene’ because — I don’t know. I’ve never seen a breakup scene where there basically is no fight or breakup. It’s just a person sort of intellectualizing behavior and what’s happening in the breakup.”

But when he arrived in the morning to rehearsal, that element had left the scene. “I was like: ‘Oh, no!’ And because I think I speak up so rarely — I’m just sort of, ‘yes.’ But that moment really resonated with me. So, we ended up doing that scene in the end.”

Glad that “it was moving in another direction and it sort of moved back in the direction it was before,” Groff acknowledged that “it’s hard to pick a thing where you’re like: ‘I don’t agree with [Fincher’s] vision’ because his world and his point of view is so specific. Gosh, I feel like I’m just giving David Fincher a blow-job in this interview.”

Gyllenhaal then jokingly offered him an invitation to “come be on ‘The Deuce.'”