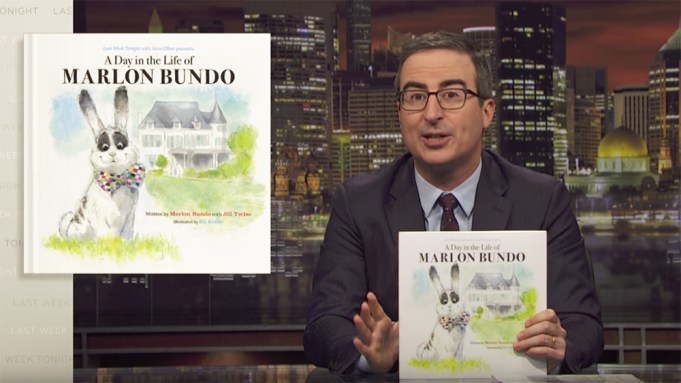 On Sunday’s “Last Week Tonight With John Oliver,” the host returned to one of his favorite on-air pastimes — trolling the Trump administration.

This time, his target was Vice President Mike Pence, who has been criticized for his stances on LGBT issues, especially when he was governor of Indiana. Oliver admitted that there was one thing he still liked about Pence, which is his pet rabbit named Marlon Bundo, which the comedian said was “an objectively good name for a bunny.”

“Marlon Bundo is the most likeable thing about an otherwise unlikeable man,” Oliver said during the segment. “Like how George W. Bush is a perfectly fine painter, or how Bill Cosby raised Americans’ awareness of pudding or how Roger Ailes is dead. Sometimes you can’t deny that there’s one thing you like about someone.”

He went on to reveal that the Pence family was publishing a children’s book based on the rabbit, titled “Marlon Bundo’s A Day in the Life of the Vice President,” written by Pence’s daughter Charlotte and illustrated by his wife, Karen. In Oliver’s view, the book “even managed to ruin Marlon Bundo,” as the book tour includes a stop at Focus on the Family, a group that supports gay conversion therapy.

That was when the host revealed his joke, saying, “It turns out in a complete coincidence, we also wrote a book about Mike Pence’s rabbit that has also been published. In fact, while his is out tomorrow, ours is released right now.”

“There are a few small differences between the two books,” he added. “You’ll notice right away that our rabbit has a bow tie, so there’s that. Also, our story is about Marlon Bundo falling in love with another boy rabbit because our Marlon Bundo is gay, just like the real Marlon Bundo.” An audiobook of the story, titled “A Day in the Life of Marlon Bundo,” is also available, featuring voices from Jim Parsons, Jesse Tyler Ferguson, Jeff Garlin, Ellie Kemper, John Lithgow, Jack McBrayer, and RuPaul.

“This is an actual book for children. It’s not some adult book telling Mike Pence to go f— himself, although in buying it, that’s exactly what you would be doing,” Oliver concluded.

The book is available on Amazon and betterbundobook.com, with all proceeds donated to the Trevor Project, which provides counseling and suicide prevention services for LGBTQ youth. On Monday, Oliver’s book is at the top of Amazon’s best-sellers list, while the Pences’ book is currently No. 11 on the list.