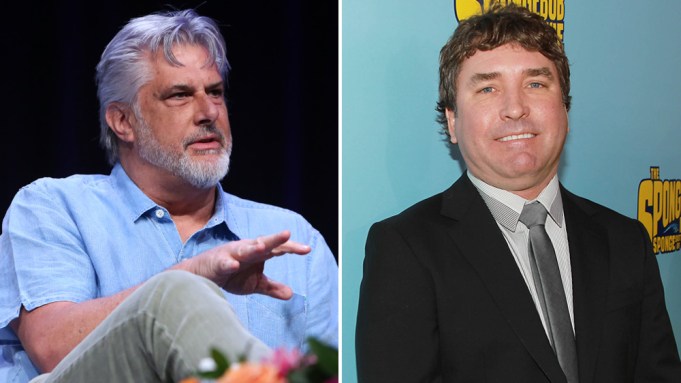 I first met Steve through the big screen at the Ottawa Film Festival in 1992. His film “Wormholes” was in competition and, after watching it, I immediately knew we would get along well. I approached him in the lobby and told him about this show I was doing for Nickelodeon called “Rocko’s Modern Life” and asked if he would be interested in working on it. I was already in awe of his talent, and the two of us, neither having worked in television, thought it would be funny to see what kind of havoc we could bring to the medium.

Little did I know that, with SpongeBob, he would change the face of television forever.

His work on my show was top-notch. I’ll never forget staying up late, working out the kinks of episode after episode together, or him crying from laughter while playing a tape of burp-talking he wanted to use to make an episode. It was obvious that someone in entertainment would have snatched him up quickly, had I not have been lucky to have gotten to him first. I remember an executive at Nickelodeon wondering if he was even right for television. He wasn’t. He was right for new television. Always striving for something better, fresher, different. He was passionate, brilliant, and tireless.

When “Rocko” ended, he showed me a pitch for a series he was working on called “Spongeboy.” I thought it was fantastic choice to delve into his undersea creatures, because it married his love for and education in oceanography with his extreme talent for cartoons. “Spongebob Squarepants” got picked up and after two seasons was well on its way to superstardom. I loved the fact that he insisted on producing a limited number of episodes at a time, choosing not to overlap seasons, which is the norm in animation because of the length of production time. He loved quality and respected his audience. That’s what made his episodes on “Rocko” and “SpongeBob” so great.

Steve was a great friend, and wonderful husband and father. Our children played together, and dinner at the Hillenburg’s was filled with great conversation and wonderful food prepared by his wife, Karen. He was generous, honest, and funny. Upon meeting him, nobody would ever sense any air of ego, despite being in the presence of a legend, a game changer. He and Karen were also philanthropists, widely recognized for their generosity and commitment.

Sometimes he was just Steve the surfer. And that Steve was just as memorable.

In recent years, we were not as in touch as we used to be, but I still knew he was a friend. I barged in on a “SpongeBob” writers meeting last year, while working on a “Rocko” special at Nickelodeon, and said hi. We hugged and vowed to get lunch. But we were both busy and that lunch never happened. He faced his illness with as much strength and class as everything else he did. And although we saw the end coming, it came too soon.

His mark on entertainment will endure, and his contribution to this world will always be felt. I feel honored to have worked side by side with him, and anyone who knew him or was entertained by his work should be forever grateful.