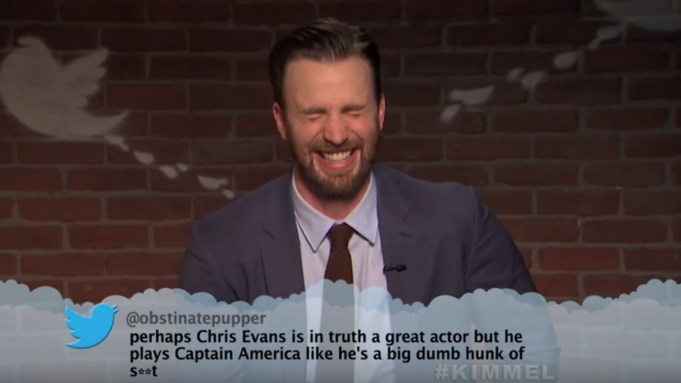 Some highlights included Cumberbatch (“Benedict Cumberbatch always looks like he’s had an allergic reaction to bad shrimp”), Bettany (“Paul Bettany — what a c—“), and Boseman (“Okay, how did the coolest blackest dude in the galaxy end up with a whitebread-ass name like Chadwick”).

Evans was so amused by his mean tweet that he could barely finish reading it: “Perhaps Chris Evans is in truth a great actor, but he plays Captain America like a big dumb hunk of s—.” Who can say, though, whether it was this particular tweet that had Evans in stitches — he appeared on “Celebrities Read Mean Tweets #10” and could hardly get through that one either: “Chris Evans is a stupid bearded sweater wearing dumb dork.”

The “Mean Tweets” segments began back in 2012, and has continued since, with special editions like NBA players and musicians.