Jimmy Kimmel Gets Emotional About Florida Shooting: ‘Children Are Being Murdered’ 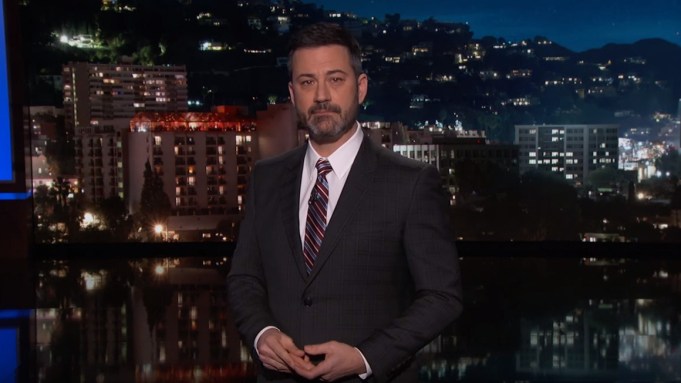 Jimmy Kimmel addressed the school shooting that occurred in Parkland, Fla. during his opening monologue Thursday night, calling on President Donald Trump to tell his Republican allies in Congress to “do something” about the attacks that continue to occur in the United States.

He started the segment by recapping the events, his voice quavering as he described a gunman who was a former student opening fire on the school, killing 17 people. He played two clips of President Trump’s televised address following the shooting, in which the President said “no child, no teacher should ever be in danger in an American school” and “no parent should ever have to fear for their sons and daughters when they kiss them goodbye in the morning.”

“I agree with both of those statements,” Kimmel said. “And here’s what you do to fix that: tell your buddies in Congress, tell Paul Ryan and Mitch McConnell and Marco Rubio, all the family men who care so much about their communities, that what we need are laws, real laws, that do everything possible to keep assault rifles out of the hands of people who are going to shoot our kids. Go on TV and tell them to do that.”

“Don’t you dare let anyone say it’s too soon to be talking about it,” he continued. “Because you said it after Vegas, you said it after Sandy Hook, you say that after every one of these — eight, now — fatal school shootings we had in this country this year. Children are being murdered…” Kimmel broke off as he choked up.

He went on to call Trump out for doing “worse than nothing” by rolling back the regulations designed to keep firearms out of the hands of the mentally ill and for his party’s vote to repeal the mandates on coverage for mental health.

“I agree, this is a mental health issue,” he said. “Because if you don’t think we need to do something about this, you’re obviously mentally ill.”

Kimmel played a last clip of Trump’s speech, in which he said that the nation and his administration would do whatever it could to ease the pain of the families of those killed. Kimmel urged the President to actually do something in response.

“Eight out of ten American agree that a teenager shouldn’t have an AR-15, so why does a teenager legally have an AR-15?” he asked. “Somehwere along the line, these guys forgot they work for us, not the NRA, us. And this time, we’re not gonna allow you to bow your head in prayer for two weeks until you get an all-clear and we move on to the next thing.”

Kimmel issued a recommendation to people who agreed with his stance, telling them to go to everytown.org, which can show them how to contact their representatives to voice their opinions. He finished by saying he was “very, very, very, very tired of this,” and then played a reel of Republicans stating that now is not the time to “have the discussion,” ending with Trump saying “it’s a little bit soon to go into it.”