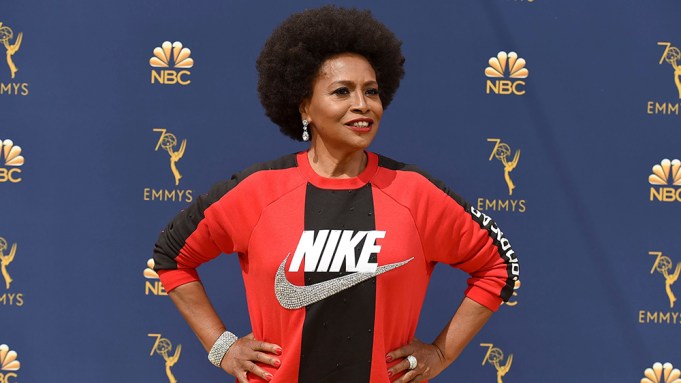 Broadway actress and “Black-ish” star Jenifer Lewis wore a custom Nike sweater with the brand’s emblem on the Emmys red carpet in support of Colin Kaepernick.

“I am wearing Nike to applaud them for supporting Colin Kaepernick and his protest against racial injustice and police brutality,” she told Variety on the carpet.

She explained that she was wondering, “What can I do? What can I do that’s meaningful? I’ll wear Nike. I’ll wear Nike to say thank you. Thank you for leading the resistance! We need more corporate America to stand up also.”

Nike’s new iteration of its “Just do it” ad campaign features the NFL free agent with the caption: “Believe in something. Even if it means sacrificing everything.”

Kaepernick, who played quarterback for the San Francisco 49ers, knelt during the National Anthem before NFL games in 2016 to protest police brutality toward African-Americans. He is currently involved in a legal battle with the NFL after filing a grievance that owners had colluded not to hire him after he became a free agent.

His actions ignited national controversy, with staunch critics and supporters on both sides. President Donald Trump has criticized the league for not keeping its players from protesting before games.

Many people on Twitter have expressed their outrage toward the campaign by posting photos and videos of them burning their Nike items, calling the ad campaign and the company un-American for supporting Kaepernick. However, celebrities like Zendaya, Ava DuVernay, Kathy Griffin, and Chelsea Peretti have shown their support on social media, by retweeting the ad or posting hashtags like #ImWithKap, #JustDoIt, and #TeamNike.

On “Black-ish,” an episode about Kaepernick was scrapped by ABC over “creative differences.” However, the network maintained that the kneeling storyline was not the reason for the episode’s axing.