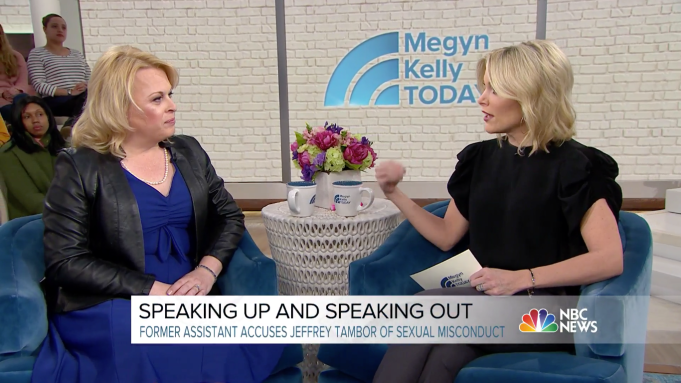 Van Barnes, former assistant of “Transparent” star Jeffrey Tambor, appeared on Wednesday’s edition of NBC’s “Megyn Kelly Today” to detail the sexual harassment allegations she has leveled against the actor.

Barnes expanded on previous statements regarding Tambor’s alleged inappropriate behavior. She maintains Tambor subjected her to unwanted physical contact and lewd remarks. Tambor has denied the allegations, which surfaced in November amid the rise of the #MeToo movement. Last month the veteran actor was fired from the Amazon comedy series after four seasons and back-to-back lead comedy actor Emmy wins in 2015 and 2016.

“Continually, I was always harassed,” Barnes told Kelly. “It ran the gamut of sexual harassment, physical harassment, and verbal abuse, constantly. This all really falls under the problem Hollywood has right now with this abuse of power and misogyny.”

Over their two years working together, Barnes said Tambor made repeated improper comments toward her, asking her, “Why haven’t we slept together?” and telling her he once watched her while she was naked and asleep. Barnes, who is a transgender woman, said she was drawn to the show because of its groundbreaking portrayal of a transgender character, Moira Pfefferman, who comes out late in life to her extended family.

“I would always deflect these comments because, I might be white and blonde, but I’m actually a minority female because I’m transgender,” Barnes told Kelly. “And so, breaking into the industry, it takes a lot of oomph. Not everyone is really open to having a transgender person working for them.”

Kelly asked Barnes whether she was satisfied with his exit from the show.

“Him being fired is just in a male-driven Hollywood, and he brought this on himself, but they haven’t completed the whole process of helping me stand back on my feet,” Barnes said.