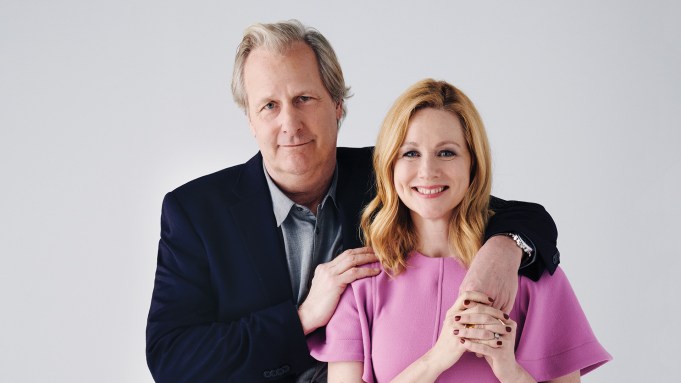 Laura Linney: People have asked me a lot, “When did you feel like you’d made it?” Did you ever have that moment? Because I feel like I’m not there yet.

Jeff Daniels: I completely agree, because it depends what your definition of “making it” is. Is it having a million bucks in the bank, or being in a movie that’s No. 1, or getting a multi-picture deal with some studio? Is that making it? We did “Squid and the Whale” together, and is making it the reaction you get from someone who walks up to you who says, “I just saw ‘Squid and the Whale.’ My family was divorced. Oh, that movie!” Is that making it? I think that’s making it.

Linney: When you were little, did you know you wanted to be an actor?

Daniels: No. It’s just something I was good at. Did you have the thing, “Oh, my God, I want to be in lights”?

Linney No, I didn’t have that. I knew that I wanted to be an actor, but I kept it a real secret. I was too embarrassed to say it because I would encounter kids who would be like, “I’m gonna be an actor.” And I would want to fall into the earth when I would see them behave that way. I don’t know why it made me embarrassed, so I kept it a secret for a very long time. … I have moments, I think, where I’m still embarrassed to say that I want to be an actress.

Daniels: Because people don’t understand. That it’s not really work, is it? It’s just being famous, right?

Linney: Yeah. [Laughs.] What I love is the misconception of “Well, you’re an actress — just lie.” Acting is not lying.

Daniels: No. I think making a living in it is making it. That’s where I live. There’s a longevity club. Because so many of our friends who are equally talented, maybe more so, are out. Or they didn’t have the drive, or they didn’t have that relentless “I’m not giving up.” I sit with college kids and I go, “You have no idea what it is you’re going to need inside of you to withstand the rejection that I still feel in my 60s.”

Linney: Of allowing yourself to feel bad when things don’t go well, when you’re embarrassed, or you’re rejected or humiliated. Or when you fail. I’m a big advocate for failure, but there is that sense of putting it all in some sort of perspective, so that you can keep evolving, so that you don’t become too knowing. A lot of young actors fall into this pitfall of just becoming too knowing. I think you can go nowhere if you feel like you know what’s happening.

Daniels: In my 60s, I have a pretty good idea of how to do this, so now instead of doing a brand, instead of Laura Linney the action star, that’s who you are. My side is full of those guys. And what’s so great about “Ozark,” about “Looming Tower,” about all those shows is the writing. And people like us get to risk failure. We get to try things. We get to take all that stuff we’ve learned and test it, and those are the actors I watch. Those are the ones I pay attention to, not the ones who are going, “Let me do that thing I did over and over and over again.”

Linney: We’re both lucky because we’re not in one medium. I did a play last year; I’m doing a play when “Ozark” finishes in the next week. You’re off to do a play; you’ve done two series the past year. There is something about the circulation of different environments and different requirements for the job. So this is one question that I have for you, since you’ve just done these two big series: Because we were both trained in film and in theater, where there’s a beginning, middle and end to a story, where you have all of the information so that you can do very, very detailed work, how do you handle the unrolling of a character over a long period of time? What decisions do you make? Do you make decisions? Do you just sort of roll with it? ’Cause that’s something that I struggle with. I struggle with not knowing what’s happening. I feel like I can’t plant the things that I would be able to plant, say, in a two-hour movie, in the first act that would then pay off at the end of the movie.

Daniels: You never will know what’s going to come because they don’t know, so you’ve got to give up. I give it up. “Newsroom” was like that. Aaron Sorkin would write an episode at a time. So I played the moment, played the episode. This is all I know. I don’t know what happens next month in my own life, and so I try to look at it like that.