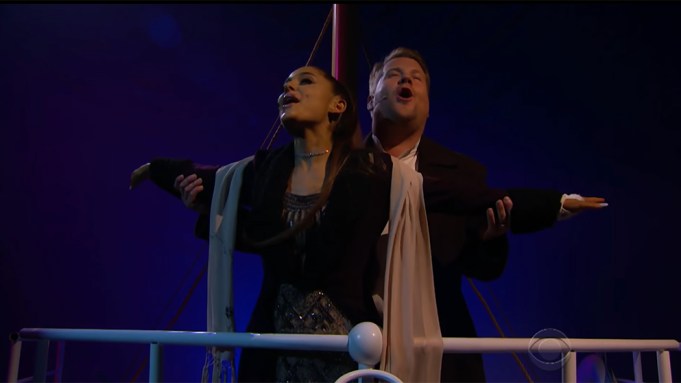 The duo ran through a medley of 13 pop songs across nine different sets in a segment billed as a reenactment of the Jack and Rose love story from the Oscar-winning 1997 blockbuster starring Leonardo DiCaprio and Kate Winslet.

The medley started with Styx’s “Come Sail Away” and ended, of course, with Celine Dion’s power ballad from the movie, “My Heart Will Go On.” CBS noted that the segment was shot in one take.

Grande will be back on “Late Late Show” on Wednesday to appear for the second time in the show’s popular “Carpool Karaoke” segment. Grande injured her hand while taping the “Karaoke” segment last week. Her latest album, “Sweetener,” is set for release on Friday.

Here’s a complete track list for the “Titanic” number, which can be viewed below.