‘House of Cards’ Bosses Preview Season 6 Without Spacey: ‘His Presence Is Felt’ 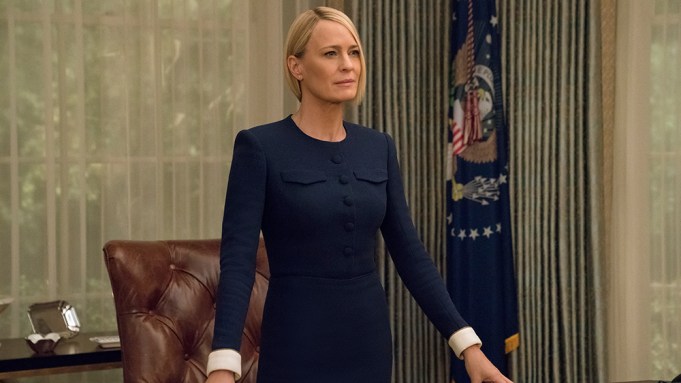 When Kevin Spacey was fired from “House of Cards” amid allegations of sexual misconduct, the show was already in production on a long-planned final season.

But after a hiatus — and a lobbying effort by series star Robin Wright — the show resumed without its leading man. It fell to co-showrunners Melissa James Gibson and Frank Pugliese to quickly craft a new ending that would resolve all of the onscreen machinations of Frank Underwood (Spacey) and his wife, Claire (Wright), who’d taken over the presidency in the final moments of Season 5.

Here, the showrunners tell Variety how they reacted to the news about Spacey, how much the finale reflects our current national obsession with politics, and what to expect of the drama’s final twists.

Knowing this was going to be the series finale, what did you want to accomplish?

Gibson: We wanted to end it with integrity. We wanted to take the seeds of what was there and pay them off properly. That was really it.

Pugliese: There was a notion of reckoning, and reckoning with the show’s relationship to complicity: the complicity of the characters with the audience, complicity with each other. And that sort of grows towards breaking down and looking at the relationships that were all over the show.

Gibson: Right, and that word “reckoning.” Claire Underwood is reckoning with herself, with her choices, with the country, with the historical moment, with everything she’s done and been complicit with. Yeah, those were the driving forces for us in terms of finishing.

Pugliese: So when Melissa and I, starting Season 3, even us just writing on the show, we had started talking about the uniqueness of the marriage and it seemed to be something that the show was exploring about their marriage, compromises they made and the nature of their partnership, and how that was evolving over time. To a certain extent, Claire becomes a big part of that because she seemed to be ascending through the course of the series and through the course of the story. So no matter what, the end of Season 6 is going to be about that.

Gibson: Right, and as you know, I mean, Season 5 ended with Claire turning to the camera and saying, “My turn.” So Season 6 was always going to be an exploration of what that means.

How much did Spacey leaving the show shape what ends up happening in Season 6?

You were already in mid-production when the news about Spacey broke. What changes did you have to make?

Pugliese: Last year, leading up to the end, and the moment which she looks at us and says, “My turn,” we always had a feeling that we were going to, in Season 6, talk about who owns the White House. Who owns the presidency. And in a way, Francis leaving office and resigning, he’s going to resign because he wanted to be the person who owned the White House. Now, in a way, that question still remains in the sixth season, and Francis’ absence actually became an opportunity to get story about all the characters that are trying to fill that gap.

Gibson: Yeah, a lot of characters are vying to occupy that space and then of course, you know, he makes his presence known. It would have been absurd to deny the powerful existence and shadow of Francis Underwood and the history and DNA of the show, so all the rest of the characters have to navigate what went on with him prior to this season.

Pugliese: And also, it’s kind of a great opportunity for Claire: who is she going to partner with? In many times, a lot of the characters around her go from being her antagonists to a partner and back to being an antagonist.

Gibson: She, I think, emerges this season. Maybe the secret sauce of the show is when you’re first watching it, you think there’s one central character, and as the show evolves, you understand that there’s two, and I think she’s emerging this season as as much of a layered antihero as he ever was. She’s no longer in the shadows and that happened the moment she ascended to the presidency. I feel like we get to watch the character grapple with herself and face herself and we get to know her better than we ever have, which was an exciting opportunity.

What was your reaction when the news first broke about Spacey?

Pugliese: I just couldn’t believe what I was hearing. I couldn’t sleep, so I turned on the BBC at 3:30 in the morning, and the story was breaking on the BBC. I kept thinking I didn’t hear it right.

Does that reflect the man you knew and worked with?

Gibson: Our relationship with him was entirely focused on the story. We’d have intense conversations about arcs and scripts and scenes and dialogue, but our dealings with him were always and only about the work. They were great conversations and rich conversations for the better of the story, but that’s what it was.

Pugliese: Right. If there was any way to categorize it, it was professional and really just about the show, never about anything else.

How much does the show reflect what’s going on in Washington right now?

Pugliese: Even when we took over [as showrunners in Season 5], we were just continuing and hopefully serving the story that was in motion. And at its best the show is about a Washington and about a White House that’s symptomatic of the times. Not so much in a reaction to the times.

Gibson: The seed of the show, the entire series, was watching a man who was passed over and what happens as a result of that. I guess I would argue there’s some… draw the connections as you will.

I know you talked about whether we’re ready for a female president. Is that something that you wanted to lean into with the season?

Gibson: Absolutely… I think we see her caught between her various roles in the show, a lot. That’s inevitable for someone who has been both First Lady and President.

Pugliese: We’ve always tried to look at what’s in the air, and stuff that’s happening around us. The character Claire, and the story of that marriage, and her ascension, and her having to go from being first lady to the president, it’s unavoidable that certain issues that are in the air now have to be dealt with in that story. It was going to end up here anyway.

Gibson: Right, because that was the negotiation of this unique marriage and partnership that’s been going on since the get-go. This season, it also puts Claire and Doug in a very unique position with each other, because the third of that triangle is no longer there. They’re left to work together, and/or apart, to figure out a way forward.

These are two characters that don’t really like each other.

Gibson: Exactly, but they need each other. They know each other’s secrets.

Pugliese: They both know where the body is.

Gibson: There’s power in that.

Can they trust each other, or is that the fundamental question?

Gibson: Right, and do they have to?

Pugliese: In the rules of this show, you don’t do well on this show when you are good or …

Who is more ruthless, Claire or Frank — or should I throw Doug in there too?

Gibson: That’s kind of the question of the season. You put the nail on that right there, that’s what we’re grappling with. It might be a question of, how ruthless is a female president allowed to be?

That’s where the device of breaking the fourth wall really works so well for Claire, because you can be persuaded that you’re getting a look at what she’s really thinking and feeling.

Pugliese: But, her relationship is entirely different with us than with his.

Gibson: Very much so.

Pugliese: She told us last season, toward the end, “I’ve always known you were there, I just didn’t choose to engage.” The ways in which she does that this season are new and very distinct from Francis’ relationship with us.

Gibson: We talked earlier about the season being about reckoning and complicity. There’s something about those direct addresses that are like inviting and negotiating complicity with the audience, and it’s interesting to see how Francis did it. And then it’s kinda great and an opportunity to see how Claire does it. Francis seems like he’s always campaigning, while Claire is always sort of negotiating trust.

Will anyone else get to break the fourth wall, too? Do we get to hear Doug talking to us?

How would you describe the series finale?

Gibson: At the opening of the series, we had Francis Underwood telling us there are two kinds of pain — the sort of pain that makes you strong, or useless pain that’s only suffering. I hope, by the end of this series, that we’ll feel like it’s been a thorough exploration of that thesis he set out at the beginning.

Pugliese: I think the one thing I will say is, there is some idea of, kind of a decade or so worth of male antiheroes on TV, and I think it was just really exciting to write a female antihero.

Gibson: Yeah. And for that to be the guiding light of the season, to allow her to be as complicated and surprising as he was, it was really important to us.

This season you added some new cast members, including Diane Lane and Greg Kinnear. What did you want their characters to bring to the show?

Gibson: Frank talked about the season being, in part, exploring who owns the power, and those characters play a big part in that.

Pugliese: Even when we were working on Season 5, we knew that by Season 6 we wanted to start exploring the power behind the power. So those are characters that will hopefully help us explore that.

Did you model them on anyone in real life?

Gibson: We did a lot of reading and talked to a lot of people.

This season also explores Claire’s backstory. Why did you want to tap into her history?

Pugliese: I think she needs to explore it. Like we said, this is what happened with Francis on screen also, is that she had a space to negotiate who her partner should be. Why does she even need a partner? Who is she in all this? It just seemed like, what a great opportunity. It seemed like we had to go there, so she had to start looking at that.

Does she have any allies? Is there anyone that she can trust or be honest with?

Gibson: That’s a question that’s central for her as well. A character who has essentially isolated herself for many seasons is even more in need of a friend, but she’s got to navigate that.

What motivates her? Is it power?

Pugliese: I would say that power seems to motivate them as a couple.

Gibson: Right. That was the religion of the couple. Seeking power was sort of their version of sex. But, absent Frank, that’s a profound question for her. This season is her wrangling with her true motivations, and not accepting anything at face value that seemed to be true before.

I know there had been talk at some point of a Doug Stamper spinoff, but it sounds like that’s not happening?

Pugliese: Not that I know of, but …

Is there any way in which you would want to continue this world?

Pugliese: The world is fascinating. And that whole world, you can see it every day on TV.

Gibson: Indeed, we do.