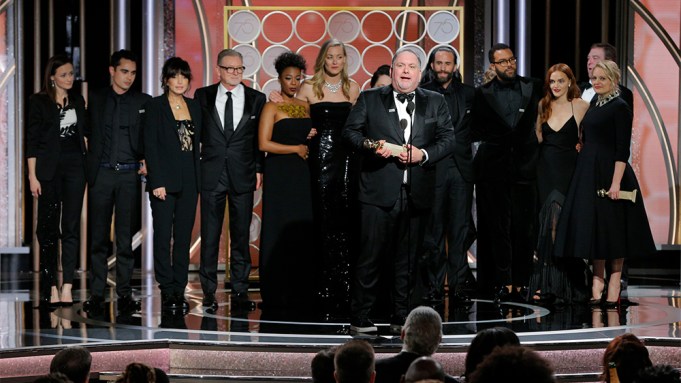 Backstage, producers and cast members said there are heartened to see the emergence of the Time’s Up and #MeToo movements advocating for empowerment and justice for women facing abuse and harassment. The headlines of the past few months, amid the deluge of women coming forward with stories of workplace misconduct, have been a kind of eerie parallel to elements of the series based on the famed 1987 novel by Margaret Atwood, about a post-war America in which women have lost civil rights and are treated as property by men.

“A lot of time we wish we were not as relevant as we are,” said executive producer Warren Littlefield. “When we went into development and production the world was … not the Trump world. Midway through the first season the reality changed and every day we’re reminded of what we carry forward. We have a responsibility to live up to Margaret Atwood’s vision and to be part of the resistance. Today we join the resistance for Time’s Up. That feels for all of us a really important and good place to be.”

Moss said the success of “Handmaid’s Tale” for Hulu is also meaningful for the industry in demonstrating that female-focused projects can be commercially viable.

“We want to tell stories that reflect our lives back at us,” she said. “Many, many women watch television and go to the movies. We want to see ourselves.” Moss also emphasized the high number of women working behind the camera, influencing the look and feel of the show.

“Hollywood is learning that this makes money. It’s doing well. That is something that people are listening to,” she said.

“Handmaid’s Tale” showrunner Bruce Miller would not give up any hints about plans for the show’s second season, expected to bow in the spring. The story will extend beyond the plot of the novel for the first time, with Atwood’s blessing. The only tidbit he would offer was that the storyline would take key characters to “the colonies” outside of the region known as Gilead where most of season one takes place.