How ‘Handmaid’s Tale’ Costumes Became a Symbol of the Resistance 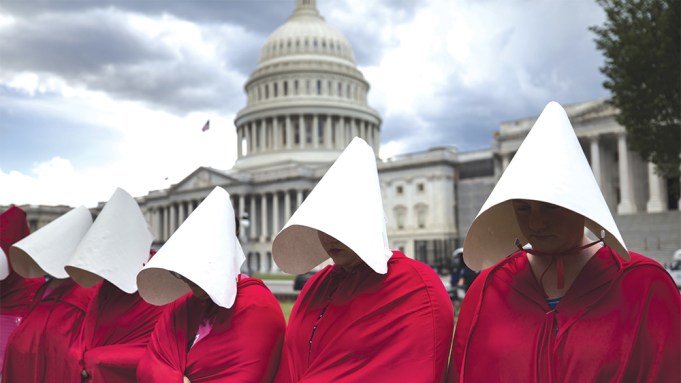 Kari Skogland, Emmy-nominated director of Hulu’s adaptation of the Margaret Atwood book “The Handmaid’s Tale,” perhaps best describes the zeitgeist-y effect of the show when she says, “I think ‘Handmaids’ is absolutely inextricably linked to the #MeToo movement.”

So much so that the standard-issue scarlet-red robes and white-winged bonnets of the show’s handmaids — women treated as child-bearing slaves by a patriarchal society — have become a symbol of the resistance.

“It’s amazing, flattering and horrible,” says showrunner Bruce Miller. “You wished you lived in a world where when people dressed up as handmaids, it was just Halloween and not a political statement. I would very much like our show to become irrelevant — interesting but completely fantastical.”

Handmaid protests aren’t limited to Washington, D.C. They have sprung up during women’s rights rallies throughout the U.S. as well as in Ireland and Argentina.
Says “Handmaid’s Tale” star Madeline Brewer, “When you see women wearing red robes in the street protesting someone who wants to literally take every woman’s bodily autonomy away from them, that’s why we do it.”