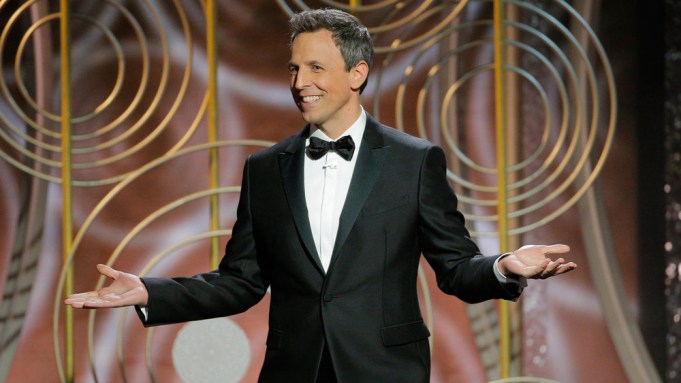 Meyers’ opening line set the tone, in which he said, “Good evening, ladies and remaining gentlemen.”

He did not let up from there, reminding the male nominees in the room, “This is the first time in three months it won’t be terrifying to hear your name read out loud.” Meyers also addressed the criticism that he was chosen to host the annual awards show instead of a man.

“If it’s any consolation, I’m a man with absolutely no power in Hollywood. I’m not even the most powerful Seth in the room tonight,” he joked, giving a quick nod to Seth Rogen. “Remember when he was the guy making trouble with North Korea? Simpler times.”

Meyers continued the Donald Trump jokes after that, saying that the Hollywood Foreign Press Association — which chooses the winners for the Golden Globes — begins with three words that seemed designed to infuriate the president. He said the only way it could be worse if the organization was called the “Hillary Mexico Salad Association.”

He also took several swipes at Harvey Weinstein, referring to the embattled producer as “the elephant not in the room” and saying that Weinstein will “be back in 20 years when he’s the first person booed in the In Memoriam.”

Kevin Spacey was not spared either. “Well, despite everything that happened this year, the show goes on,” he said. “For example, I was happy to hear they’re going to do another season of ‘House of Cards’ … is Christopher Plummer available for that, too?”

As he closed out his opening remarks, Meyers congratulated all the female nominees in the room, specifically praising them for leading the charge to combat sexual harassment and misconduct in the industry. “I look forward to you leading us into whatever comes next,” he said.