‘GLOW’ Creators on Emmy Nominations, Power of ‘Seeing 14 Women in a Frame’ 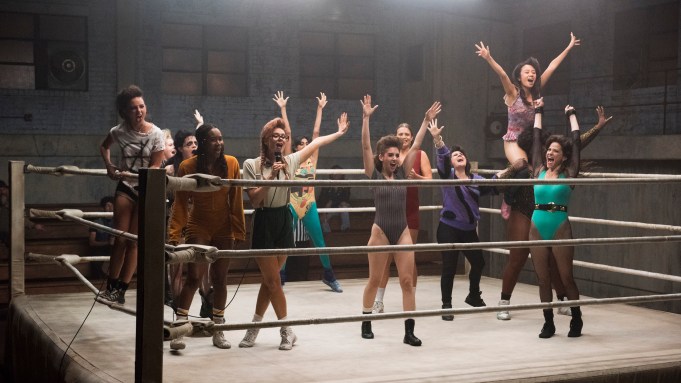 The Netflix wrestling comedy “GLOW” picked up an impressive 10 Emmy nominations for its first season on Thursday, including best comedy series and best supporting actress in a comedy series for Betty Gilpin.

Series creators Carly Mensch and Liz Flahive spoke with Variety about what has made the show, which just launched its second season, so popular.

“It’s a story of people working together and a story of how hard it is to make something,” Flahive said. “I think there’s something also about seeing 14 women in a frame together that is special. It’s not something you see in every show. Maybe people were hungrier for that in this current climate.”

“GLOW” faces stiff competition in the best comedy series category, going up against “Barry,” “The Marvelous Mrs. Maisel,” “Silicon Valley,” “Atlanta,” “Black-ish,” “Curb Your Enthusiasm,” and “Unbreakable Kimmy Schmidt” in what is shaping up to be the most competitive race in this year’s Emmys.

“I’ve seen all of them and they’re all wonderful,” Mensch said. “And they’re all so different. Everyone’s doing their own thing and coming at it from different point of views…It’s a really idiosyncratic group. It’s awesome.”

And both Flahive and her daughter had words of encouragement for Gilpin in the supporting actress category.

“I texted with her this morning then left her a voicemail. And my daughter sent her a lot of emojis,” she said.