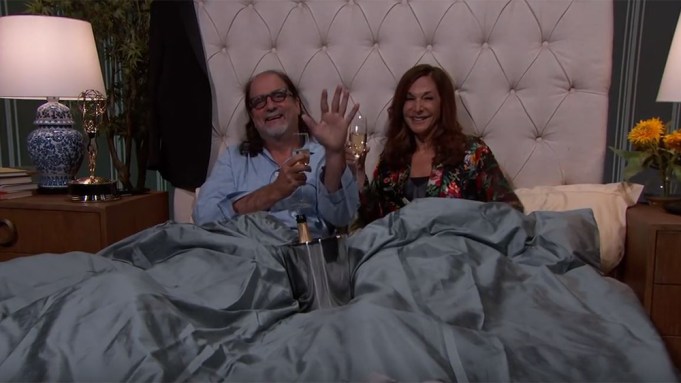 One the best moments from the 70th annual Primetime Emmys was Emmy winner Glenn Weiss’ surprise proposal to his then-girlfriend Jan Friendlander Svendsen during his acceptance speech, and the magic continued on Tuesday’s episode of “Jimmy Kimmel Live!”

“We tracked the lovebirds down,” Kimmel began. “Joining us now, the newly-engaged Glenn Weiss and Jan Friedlander Svendsen.”

The camera cut to a shot of the couple wearing pajamas in bed while toasting glasses of champagne, with Weiss’ Emmy on the bedside table.

“Glenn, no offense, but I never guessed the Emmy-winner I’d be most interested in talking to after the show would be you,” Kimmel said. “I mean, it’s really remarkable, you stole the show last night.”

Weiss’ mother passed away only two weeks before the Primetime Emmys, and he paid tribute to her in his acceptance speech.

On “Kimmel,” he explained that her passing and the last few weeks, which he described as “rough,” gave him more perspective, leading him to decide to ask Svendsen to marry him. He added that the proposal was relatively spontaneous, since his win was “an opportunity that presented itself,” and he wasn’t targeting Sept. 17 as a specific date on which he wanted to propose.

“It could’ve been October, November, or next two or three years,” Weiss said — while Svendsen shook her head beside him.

Weiss, who won the Emmy for directing the Oscars, said that he was worried the Emmys directors would cut him off if he went on too long, since that was part of his job at the Oscars.

Kimmel then pulled back a curtain to reveal that, despite the appearance that the couple was being recorded live offsite, they were actually on-set the whole time.