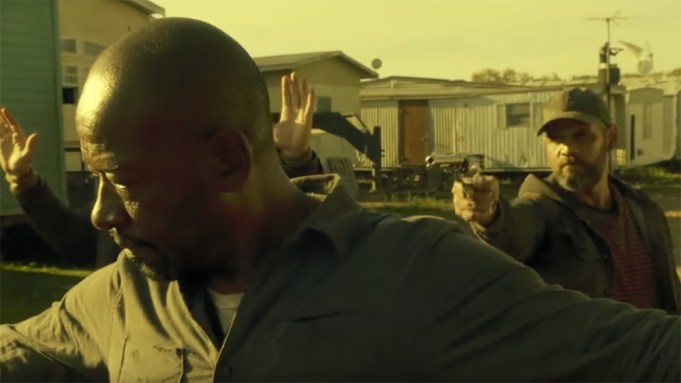 “Back east, there was a fight — a big fight,” a voiceover from Morgan explains as the character limps across the barren apocalyptic landscape. “I didn’t know how to make it stop. Good people died. I lose people, and then I lose myself.”

The trailer completes the crossover with a heart-to-heart between Madison and Morgan.

“I thought I lost my kids for good,” she tells him. “But I found them, and we found this place.”

“You should leave now,” Morgan replies, with an aura of survival-induced wisdom. “It’s not gonna work out how you think.”

Victor also gets an answer as to why Madison showed him mercy after his Season 3 betrayal.

“‘Cause I know who you are, Victor,” Madison says. “That, and I really like drinking with you.”

“Fear” showrunner Scott M. Gimple confirmed Morgan’s crossover in an episode of AMC’s “Talking Dead” that aired in November. James’ character plays alongside the Clark family protagonists as they continue to deal with the ups and downs of their dysfunctional family against the backdrop of the “Walking Dead” universe’s zombie outbreak.

“Morgan’s arc on ‘The Walking Dead’ Season 8 positioned him for the story on ‘Fear,'” Gimple said. “It was also important to see ‘Fear’s’ world and characters through new yet familiar eyes.”

Season 4 of “Fear the Walking Dead” will premiere April 15 on AMC.