Emmy Winner Proposes to His Girlfriend During Live Broadcast 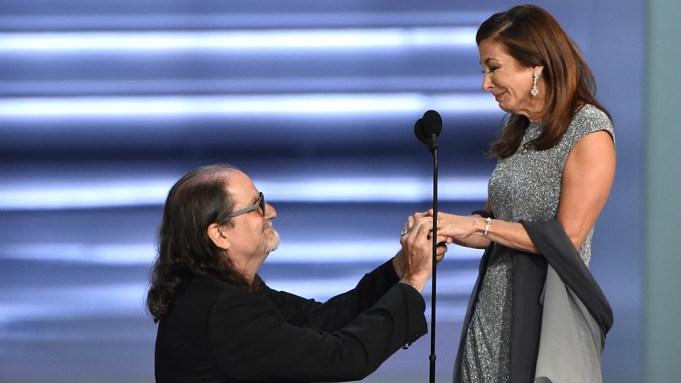 Glenn Weiss not only won the Emmy for outstanding directing for a variety special, but he also proposed to his girlfriend, Jan Svendsen — a first in Primetime Emmy Awards history.

At the start of his speech, he thanked his daughters and friends at ABC as he won for directing the Oscars ceremony.

He then began to speak about his mother, who died just two weeks ago. “Part of my heart is broken. I don’t think it will ever be repaired. But she’s in me and she always will be.”

Weiss noted how his mother always believed in “finding the sunshine,” leading him to denote Svensen as “the sunshine in my life.” He continued: “And Mom was right, don’t ever let go of your sunshine. You wonder why I don’t like to call you my girlfriend? Because I want to call you my wife.”

As soon as the word “wife” left Weiss’ mouth, the crowd erupted into cheers knowing what was coming next.

Shouting “yes” from her seat in the audience, Svendsen was ushered up to the stage from the likes of Milo Ventimiglia until she reached the arms of Weiss. As she was walking up, he joked that “I didn’t ask yet. I didn’t ask yet.”

Once face-to-face with Svendsen, Weiss pulled out the ring “that my dad put on my mom’s finger 67 years ago.” He joked: “And to my sisters and brothers, I didn’t swipe it. Dad knows I have it, okay?”

Weiss got down on his knee to ask the fateful question: “Jan, I want to put this ring that my mom wore on your finger in front of all these people and in front of my mom and your parents watching from above. Will you marry me?”

Backstage at the awards show, they went into more detail about their relationship and the proposal. They met in 2001 and had worked together for about 10 years. They both have daughters, and both of their lives essentially revolve around award shows. Svendsen worked on the Broadway League and was CMO for the Tony Awards, while Weiss has worked on shows from the Oscars to the Tonys.

The ring was his mother’s, and Weiss said no one had a heads up about the proposal but his own father. And yes, even Svendsen was surprised.

“I had no suspicions whatsoever, I had no idea,” she said. “I really hoped he was going to dedicate the award to his mother, and he did, and then some.”