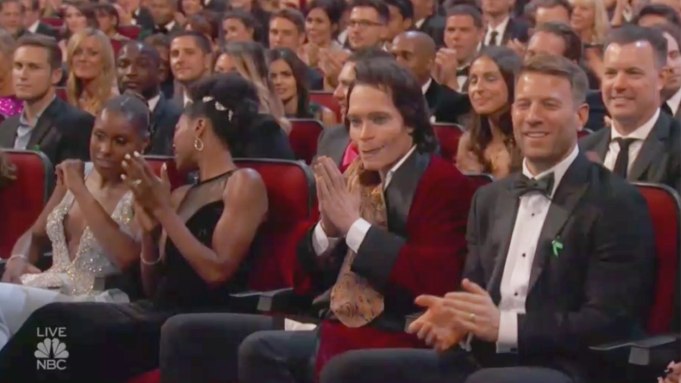 Donald Glover’s bizarre “Atlanta” character appeared in the crowd throughout the show, raising speculation that Glover showed up to the ceremony dressed in costume. However, Glover also appeared … as himself in the same seat later in the night.

“I’m all for it, phuckin TEDDY PERKINS N THE @atlantafx cast Ayyyyeee! #emmys,” he captioned the shot of the four at the Governors Ball after the Emmys.

Pharoah also retweeted articles that speculated he was the man behind Perkins.

Glover and Pharoah’s reps did not respond to Variety‘s request for clarification.

Glover portrayed Perkins in the second season of his hit FX series “Atlanta.” Perkins, who Glover plays in white makeup and a wig, appeared in just a single episode of the show as a strange man with a mask-like face who encounters Stanfield’s character, Darius.

“Atlanta” fans pointed out Perkins’ appearance early on in the show. He was sitting in Glover’s front-row seat; the actor was nominated for five awards this year. Bill Hader, who won the best actor in a comedy series prize opposite Glover, hugged Perkins before heading on stage, and backstage, said, “I don’t know who that was I hugged, but it was the guy from ‘Atlanta,’ he showed up.”

Online, the audience was quick to point out the “cameo,” with comedian Ben Schwartz joking, “the only thing more intense than Teddy Perkins being in the front row of the Emmys is trying to explain to someone who doesn’t watch Atlanta who Teddy Perkins is.”

The only thing more intense than Teddy Perkins being in the front row of the Emmys is trying to explain to someone who doesn't watch Atlanta who Teddy Perkins is.

Wait, Teddy Perkins is in attendance at the Emmys so 'Atlanta' wins the whole ceremony pic.twitter.com/pRV3Rj7xpF

I would like to take this moment to scream "WE COULD HAVE GOTTEN A TEDDY PERKINS ACCEPTANCE SPEECH" at the TV Academy pic.twitter.com/1zV1NLZADp

Correction: An earlier version of this story reported that Donald Glover was the one dressed as Teddy Perkins. It’s unclear who was behind the costume.