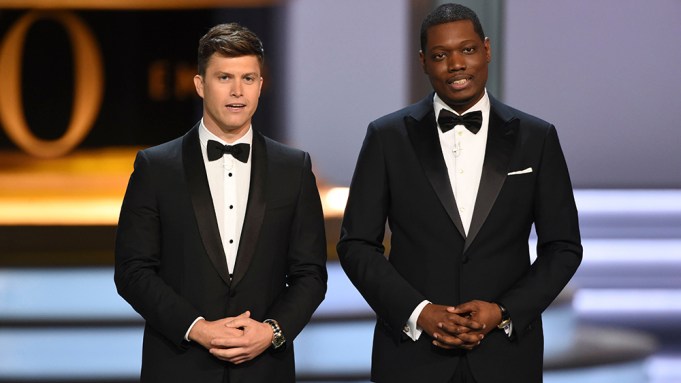 The 2018 Emmy Awards are officially the least-watched Emmys on record.

In the time zone adjusted fast national numbers, this year’s telecast drew a 2.4 rating in adults 18-49 and 10.2 million viewers on NBC. That is down only a scant few percentage points in the demo from the 2.5 rating the Emmys drew last year on CBS, but down 11% from the previous viewership low of 11.4 million viewers the Emmys drew in 2017 and 2016. For context, an episode of “America’s Got Talent” on NBC last Wednesday drew the same viewership as this year’s Emmys.

In metered market households, the awards show drew a 7.4 rating Monday night, down approximately 10% from an 8.2 last year. That also represents a new low in that measure for the Emmys telecast.

This marks the latest instance of a major award show taking a hit in the ratings. This year’s Oscars telecast was down 24% in the key demo and 19% in total viewers compared to last year, while the Grammy Awards were down 23% in total the demo and 24% in total viewers.

Very few broadcast originals aired against the Emmys. Fox aired the special ” Inside the Manson Cult: The Lost Tapes,” which drew a 0.7 and 2.5 million viewers. Back-to-back episodes of “Castaways” on ABC drew a 0.6 and 3.3 million and a 0.6 and 3 million respectively. “Salvation” averaged a 0.4 and 2.7 million viewers on CBS, while “Elementary” drew a 0.5 and 3.1 million.