J.K. Simmons, Edie Falco Look Back on the Roles That Made Them Stars 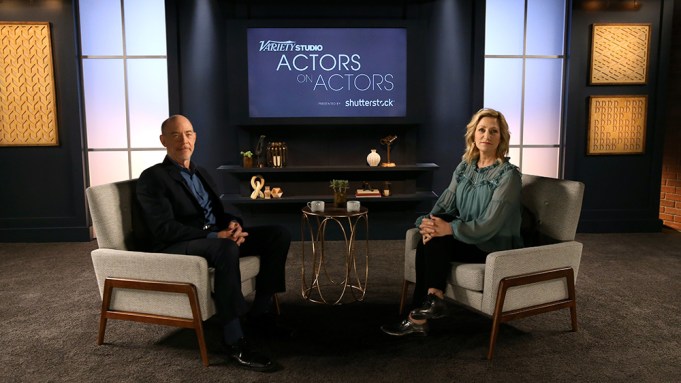 In a segment on Variety’s “Actors on Actors” presented by Shutterstock, “Counterpart” star J.K. Simmons asked “Law & Order True Crime: The Menendez Murder’s” Edie Falco which of her roles changed her career. Falco answered with her performance on “The Sopranos,” as it was the role she said garnered her recognition.

“People start to recognize you, which starts to have a leverage of its own when it comes to getting further work,” Falco said.

“Oz” came to mind when Falco flipped the question on Simmons, a show the two of them both worked on and launched Simmons’ career as a screen actor.

“That sort of put me on the map as the guy who’d been toiling away doing theater for 20 years and loving it, but now I could maybe pay the mortgage and maybe be somewhat visible,” Simmons said.

Falco said “Oz” was the first gig she worked on where she didn’t have to work a second job waiting tables.

“That’s definitely a milestone; that’s no small potatoes,” she said.

Simmons also mentioned “Whiplash” as a movie that’s changed audiences’ perception of him, something he’s glad to have at 65 and not when he was younger.

“I’m very grateful that attention didn’t come to me when I was 20-something, because God knows I would’ve done a James Dean or something,” Simmons said.

With the recognition comes the satisfaction both Falco and Simmons said they appreciate, but for Simmons, his favorite man-on-the-street moments come from people who remember him as a stage actor.

“Somebody will stop you in the street and say “Hey, I saw you in…” and they’ll talk about some off-off Broadyway play I did in 1986 that changed their life,” Simmons said.