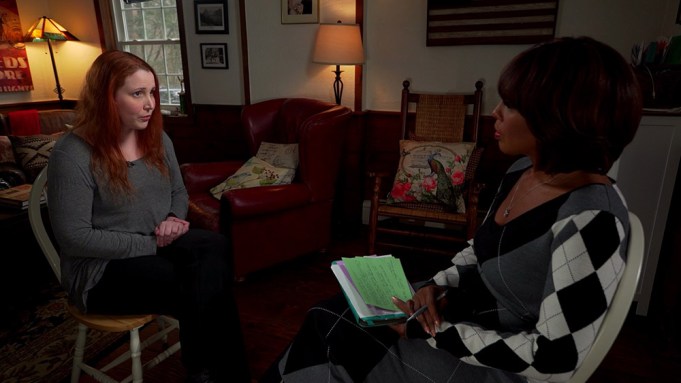 Dylan Farrow detailed her allegations of sexual assault at the hands of her father, Woody Allen, in a lengthy interview with Gayle King that aired on Thursday’s edition of “CBS This Morning.”

Farrow, 32, recounted her story of being touched by Allen, her adoptive father, in August 1992. She also said she experienced other incidents of inappropriate behavior with her father, including him asking her to come into bed with him when he was wearing only underwear. Allen has once again strongly denied the allegations.

Farrow said she decided to give her first TV interview on the alleged assault that occurred when she was 7 because of the groundswell of public support for victims of sexual harassment and abuse. She has called on actors to shun Allen and his films.

“It was very momentous for me to see this conversation finally carried into a public setting,” Farrow said of the Time’s Up and #MeToo movements. “Because I have been saying this – I have been repeating my accusations unaltered for over 20 years and I have been systematically shut down, ignored, or discredited. If they can’t acknowledge the accusations of one survivor how are they going to stand for all of us?”

Farrow broke down when King played a clip from a old “60 Minutes” interview with Allen in which he defended himself and argued that the timing of the alleged assault was nonsensical because he was in the middle of a bitter custody battle with Dylan’s mother, actress Mia Farrow.

“He’s lying and he’s been lying for so long,” Farrow said. “And it is difficult for me to see him and to hear his voice.”

Allen and Dylan’s older brother Moses have said that she was coached as a child by her mother to make the devastating allegation against her father after Mia Farrow became aware of Allen’s affair with her adopted daughter Soon Yi Previn.

“What I don’t understand is how is this crazy story of me being brainwashed and coached more believable than what I’m saying about being sexually assaulted by my father,” Dylan Farrow said.

Allen issued a lengthy statement to CBS News in response to Dylan’s statements.

When this claim was first made more than 25 years ago, it was thoroughly investigated by both the Child Sexual Abuse Clinic of the Yale-New Haven Hospital and New York State Child Welfare. They both did so for many months and independently concluded that no molestation had ever taken place. Instead, they found it likely a vulnerable child had been coached to tell the story by her angry mother during a contentious breakup.

Dylan’s older brother Moses has said that he witnessed their mother doing exactly that – relentlessly coaching Dylan, trying to drum into her that her father was a dangerous sexual predator. It seems to have worked – and, sadly, I’m sure Dylan truly believes what she says. But even though the Farrow family is cynically using the opportunity afforded by the Time’s Up movement to repeat this discredited allegation, that doesn’t make it any more true today than it was in the past. I never molested my daughter – as all investigations concluded a quarter of a century ago.”