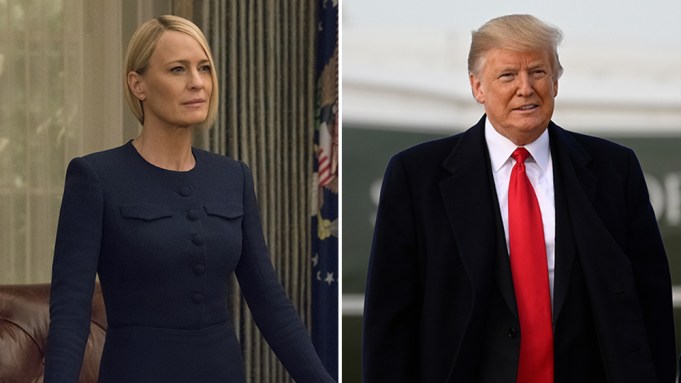 Claire Underwood is a ruthless, manipulative and sometimes murderous politician. And for the final season of “House of Cards,” she is the president of the United States.

When the Netflix series premiered in 2013, the storylines seemed purely fictional. But as the country’s real-life political landscape become more divisive and downright nasty during the 2016 presidential campaign and Donald Trump’s eventual election, the dark storylines on “House of Cards” didn’t seem so far-fetched after all.

While catching up with Robin Wright and her “House of Cards” co-stars at the Season 6 premiere in Los Angeles, Variety posed a conundrum — who would they vote for if Claire was running against The Donald?

Constance Zimmer said the fictional politician would have her vote because “I just think she’s more honest she’s more real.”

Yeah, but haven’t the Underwoods been known to have people killed? “I’d rather be in that than [Trump],” Zimmer said. “I don’t even have words to put to the other one.”

Patricia Clarkson admitted, “[Claire] wouldn’t be the best president, but she’d be the fiercest president.”

Boris McGiver didn’t even want to imagine the scenario. “I’m stuck,” he said. But if push came to shove, McGiver said, “I’d still vote for Claire.”

The final season of “House of Cards” begins streaming Nov. 2 on Netflix.