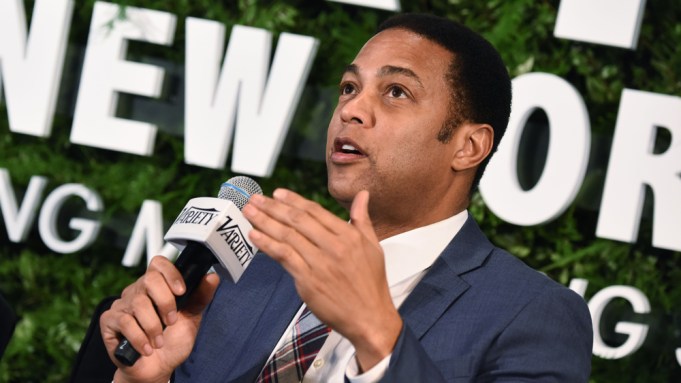 Don Lemon has drawn a thin blue line when it comes to covering the Trump administration: He’s unfollowed the president on Twitter.

The longtime CNN anchor disclosed during a keynote address Friday at Variety‘s Ent and Tech summit in New York that he took the step of dropping President Donald Trump from his Twitter feed as part of an effort to ease up his focus on Twitter in general.

“Why do I need that?” Lemon said of following Trump, noting that he has no shortage of sources that provide him news bulletins of the President’s social media missives. Lemon said he’s found Twitter is becoming “an echo chamber” of outrage for all manner of political perspectives.

“If Twitter’s not outraged by something you do, you’re not doing the right thing,” he said during a half-hour Q&A with Ramin Setoodeh, Variety‘s New York bureau chief.

At the same time, as a journalist he still prizes Twitter’s platform for its immediacy. “It’s a tool I need,” he said. “It gives me the opportunity to blast something out rather than wait for my time” on air, he said.

Lemon, anchor of the nightly 10 p.m.-midnight newscast “CNN Tonight,” spoke about the challenge of calling out what he described as lies told by the President and racist behavior. He also touched on the extraordinarily active news cycle, the importance of aggressive journalism, and the competitive landscape for CNN vs. Fox News and MSNBC. Lemon also assured the crowd at the Mandarin Oriental hotel that he has “never been drunk on television,” despite the liveliness of his New Year’s Eve telecasts with fellow CNN anchor Brooke Baldwin.

“We have to be relentless now. We have to be even more careful to make sure we are getting to the bottom of what’s going on,” Lemon said. “The biggest challenge (of covering) this administration is their relationship with the truth.”

.@CNN's @donlemon on Trump: "The biggest challenge with this administration is their relationship with the truth" | #VarietyEntTech https://t.co/p7sI8g8IRa pic.twitter.com/lT2tNYaMQT

Lemon cited the chronicle of some 3,000 falsehoods that the President has uttered since he was inaugurated in January 2017. It was not easy for Lemon to state for the first time that Trump was lying to the public and that he was also demonstrating racist tendencies. But he finally concluded that it was part of his mission as a journalist to bring objective truth to CNN viewers.

“It was a tough call the first time I ever had to call the president a liar,” Lemon said. He noted that all Oval Office leaders shade the truth or assert falsehoods that they believe to be true. “But to go out and lie to people knowingly is something different,” Lemon said. “We saw what happened with Nixon when the President does that. … I finally had to get to the point where we said ‘The President lied about this.'”

On the question of racism, Lemon held a meeting with CNN management and the cabler’s standards and practices executives. The preponderance of the evidence, going back years to Trump’s “birther” campaign against President Barack Obama, was clear.

“All you had to do is look at the evidence,” Lemon said. “Critical thinking is important as a journalist. If you cannot surmise that this president — if he’s not racist, he’s certainly racist-adjacent. We have come to a consensus in our society that facts matter. I feel like it’s my obligation to say that.”

Lemon joked that he has aged 10 years in the last two years because of the never-ending swirl of political news that began with the 2016 presidential campaign. “Look at me, I’m 23,” he quipped. The “CNN Tonight” broadcast was originally designed to run from 10-11 p.m., but the volume of news was so great it required an extra hour. Lemon told Setoodeh he doesn’t see the hamster wheel slowing down any time soon.

.@DonLemon on covering Trump: "I feel like I've aged 10 years in the past two years that I've been covering this administration" | #VarietyEntTech https://t.co/p7sI8g8IRa pic.twitter.com/fDuxtwtshC

“I think this will be the new normal for the forseeable future,” he said. If Trump runs again or faces a Republican challenger, or if the Democrats rally behind a strong candidate, “it will be just as interesting and challenging to cover,” he said.

“This is a more important time to be a journalist than at any other time I can remember other than Watergate,” he said.

Among other highlights from the keynote:

— Lemon said he is happy working for CNN because in his view, Fox News and MSNBC “have picked sides.” In his opinion, Fox News amounts to “state-run TV,” he said, echoing past comments from CNN Worldwide chief Jeff Zucker. Watching the “Fox and Friends” morning show is hard, Lemon said, because in his view it’s become a “MAGA-phone” rather than a news program, referencing the acronym for Trump’s “Make America Great Again” slogan. MSNBC, meanwhile, frequently serves up a “fairy tale” that Trump will be impeached. CNN “picked the side of truth. In this era, truth can seem partisan, even when it’s not,” he said.

— As much as Lemon has sought to bring critical scrutiny to the Trump administration, he does not see impeachment as realistic. “Chances are this President is not going to be impeached,” he said, adding that such a move “would set a dangerous precedent” in the absence of a clear-cut case of the President committing a crime.

— Lemon says he knows Trump watches “CNN Tonight” specifically because “he tweets that he doesn’t watch me.” Numerous White House officials came up to Lemon at the recent White House Correspondents’ Association dinner to tell him that Trump watches his show every night.

.@DonLemon says he knows Donald Trump watches him every night because he tweets that he doesn't | #VarietyEntTech https://t.co/p7sI8g8IRa pic.twitter.com/eSOtohk3Nd

— Lemon has sought to interview Trump many times, but he’s not holding his breath. “The emperor does not want to be told that he’s naked,” he said.

— News coverage of the 2020 presidential campaign will be significantly different than 2016 because of the hyper-partisan cultural divides roiling the country, Lemon predicted. He made reference to CNN’s decision to carry live coverage of Trump rallies without much commentary as something that won’t be repeated. “There will be no rallies that run in real time,” he said. “There will not be so much space for candidates to let them ramble on. The American people will demand that. We will expect more truth from our candidates.”

— On a lighter note, Setoodeh pressed Lemon about his participation in CNN’s New Year’s Eve coverage, which shows a looser side of its anchor team. No, he was not actually drunk, despite his live shot amid revelers in New Orleans. This past year Lemon also got attention for getting his ear pierced on live TV. But that was planned in advance, he said. “People should see that their news people are real people and not some stuffed shirt on television,” he said.