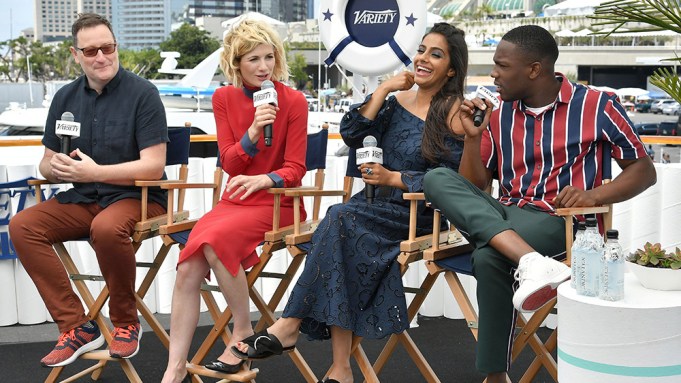 With Jodie Whittaker having broken the barrier for a female Doctor in “Doctor Who,” what other traditionally male character should next be portrayed by a woman?

“What about a Jane Bond?” suggested Mandip Gill, who will play companion Yasmin, at the Variety Studio at San Diego Comic-Con Saturday.

“His name’s James,” said fellow companion Tosin Cole, not getting the wordplay at first. “Oh, I see what you did there!” he said as Whittaker and showrunner Chris Chibnall laughed.

Chibnall, Whittaker, Gill and Cole spoke about their hopes for the 11th season of “Doctor Who,” which will feature 10 episodes at 50 minutes each.

“The big thing with this season of ‘Doctor Who’ is with a new Doctor and new friends, you want to bring in everybody around the world,” said Chibnall. “It’s sort of our biggest, most emotional, most inclusive, most epic yet. We’ve got 10 standalone stories, we’re gonna go to different worlds, different places in history, we’re going to be on contemporary earth, talking about stories that resonate with the world today and if you’re a ‘Doctor Who’ fan it’s 10 compressed shots of everything you love about the show.”

#DoctorWho showrunner Chris Chibnall says the new season will be the most "inclusive" and wide-ranging so far https://t.co/9Ui10EY9z1 #SDCC2018 pic.twitter.com/305Lfiqyza

Whittaker expressed optimism about her take on the Doctor.

“Everything that excites me about the role is how hopeful the Doctor is, how energetic, a continual pacifist — all the things that make people love the Doctor has continued, but obviously I will bring a new energy and instinct because it is me,” she said. “That’s what makes it exciting, that you can recast the same part with different actors and go in all these different directions but it’s always fundamentally the same Doctor.”

Jodie Whittaker explains what makes her Doctor different from Doctors of the past at #SDCC2018 https://t.co/9Ui10EY9z1 #DoctorWho pic.twitter.com/sBZxpEScJr

“If we just cast who we think is right for the job, just start there. And then every door is open to everyone and we don’t have to be defined by all the other things, the box-tick bits,” she said. “Obviously some are gender-specific, that’s not something to shy away from, but just audition an actor and say, ‘Who’s the right person for the role?’ It should be that simple.”

Whittaker also applauded NBC’s “Brooklyn Nine-Nine” as having a particularly diverse cast, and one of “the best TV shows ever made and is, thank God, still being made.” Chibnall and the other cast members voiced their agreement.

“I see myself in so many elements of every character, regardless of who is playing that role,” she said. She added that she looks forward to a day when diversity conversations are a thing of the past, and it’s “standard practice” to see “who our friends are, in our social circles and who we see every day, reflected on screen, as it should be.”