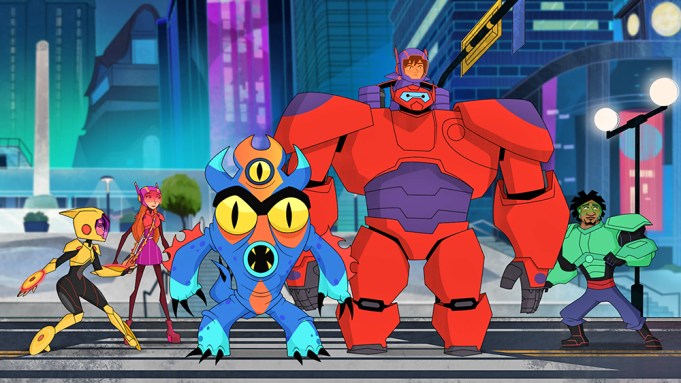 The premiere event features two back-to-back episodes each day from 9 to 10 a.m. EDT/PDT. The series will air new episodes each Saturday thereafter through September.

“Big Hero 6 The Series” picks up where the Academy Award-winning movie left off with 14-year-old Hiro attending the San Fransokyo Institute of Technology by day and moonlighting with Baymax as a crimefighter, along with his college friends Go Go, Wasabi, Honey Lemon and Fred. The series was set up last November with the TV movie “Baymax Returns,” which rewound to just before the original movie ended, revisiting how Hiro rebuilt Baymax while giving the new series a foundation for new adventures.

“The idea was to re-immerse kids into the movie and show the world in this new 2D version,” explains Bob Schooley, who exec produces along with longtime producing partner Mark McCorkle and supervising director Nick Filippi. “It captures a few of the key, emotional moments from the end of the movie but gets the audience used to the show’s different style. We wanted a story with a little bit of familiarity from the movie but opened it up in a way that introduced you to the new world the show was going to be taking place in.”

Schooley, McCorkle and Filippi know a thing or two about adapting beloved movies into successful series. Between them, their list of hits include “The Penguins of Madagascar,” “Monsters vs. Aliens,” “Buzz Lightyear of Star Command,” “All Hail King Julien,” “Hercules” and “Aladdin.” And they’re the team behind Disney’s hit series “Kim Possible” as well.

Disney asked the team to take a stab a developing the series. “Because we did ‘Kim Possible,’ which was sort of this combination of action, comedy and heart, this was right in our wheelhouse, so we were an easy sale for this property,” Schooley says.

“Well, one thing that helps [with adapting a movie to series],” starts McCorkle. “Is to have a really great movie,” finishes Schooley.

“If you’re starting with something from Walt Disney Feature Animation, you’re going to have great characters and all that, so it’s up to us to figure out a new way to move forward,” says McCorkle. With “Big Hero 6 The Series,” that was fairly easy. The main characters are “all new at being superheroes, so that was an area we could explore. Hiro’s new at this school, he’s a 14-year-old going to college. He’s a bit stubborn, a bit reckless and he takes risks. Those are all good ingredients for stories,” he says.

The movie’s ending helped set the stage as well. “It ends like it’s the pilot for a show,” says Schooley. “They’re all soaring at the camera, ready to have more adventures and we want to see those adventures.”

The look of the series is a little different than that of the film, in which most of the characters are more angular and a little more anime, with the exception of Baymax. “He does have those strong elements of our design style, but we had to keep him round and friendly,” explains Filippi. “He still does have the design elements of the intersecting lines that are the anchor points for our animators, but his just include a lot more curves.”

Coming up with a design style that separated the series from the movie was key. “We wanted something that didn’t just look like a coloring book version of the movie,” explains Schooley. “The challenge was coming up with something that we felt would give it that action-adventure feel with a little bit of anime, to have that anime meets American animation feel as part of the sort of mashup culture of Tokyo meets San Francisco.”

The majority of the cast from the film is back for the series: Ryan Potter as Hiro, Maya Rudolph as his Aunt Cass, Scott Adsit as Baymax, Jamie Chung as Go Go, Khary Payton as Wasabi, Genesis Rodriguez as Honey Lemon and Alan Tudyk as Alistair Krei. Brooks Wheelan replaces T.J. Miller as Fred. Returning recurring voice talent includes Stan Lee as Fred’s dad and Jenifer Lewis as the university’s mysterious Professor Granville.

An array of guest stars will also voice characters, including celebrity chefs Gordon Ramsey and Alton Brown, and “Conan” sidekick Andy Richter, who voices Globby, a purse snatcher who winds up paying an unusual price for his crime in the clip below.

“Big Hero 6 The Series,” which has episodes that run 22-minutes each, has already been picked up for a second season.