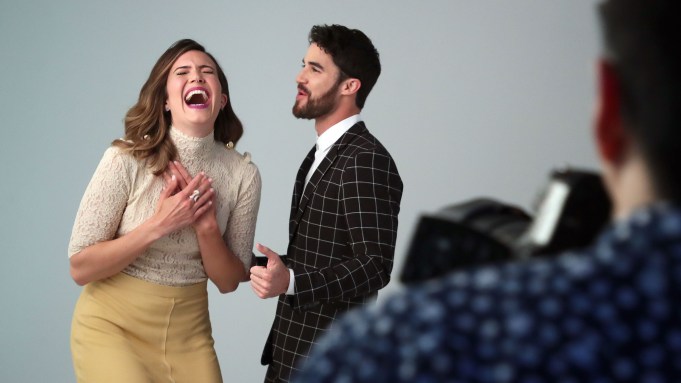 Before anything really cracking into the discussion on Variety’s “Actors on Actors,” Darren Criss had to first reveal his early days obsession with Mandy Moore’s early singing career.

“The Assassination of Gianni Versace: American Crime Story” actor praised “1999’s seminal ‘So Real’ album.” Mandy Moore’s debut album. “Not sure if you’re familiar with it,” he joked.

The “This Is Us” actress immediately responded: “I would love to give everyone their money back that bought this record!”

Despite Moore’s delightful protests Criss leaned revealing he was a true Monday stan from way back in the day, and proclaimed that his favorite track off the record was actually was only 15 seconds. “It’s the telephone interlude where you get to hear, I don’t know, maybe a 15 or 16-year-old Mandy Moore!”

Without missing a beat Criss recites the album’s special recording from a young Moore and an unknown friend.

“‘Hi guys. It’s Mandy. You know what to do after the beep.’ And then this mysterious character leaves a message who I kind of wanted, as a lover of narrative, to hear more about–this chick Bonnie. But it goes: ‘Beep. Hey Mandy, it’s Bonnie. I heard what happened. Call me back.’ Click. And then I think the ‘Walk Me Home’ song starts.”

Turning pink laughing, Moore said: “I haven’t thought about this in probably 15 years.”

The “Versace” star explained how he would see the “This Is Us” matriarch on MTV, and thought “hearing her talk, hearing her voice as a human being was so sexy and interesting,” he said. “I was like: ‘Whoa, she’s just a kid. I’m a kid. Cool.'”

Criss also disclosed how he first heard the song on a mini disc player while on a roadtrip, rewinding and “being like: ‘It’s only 15 seconds? What happens? What happens here?”

Moore cooly avoided spilling the beans: “What was she referring to? We’ll never know.”