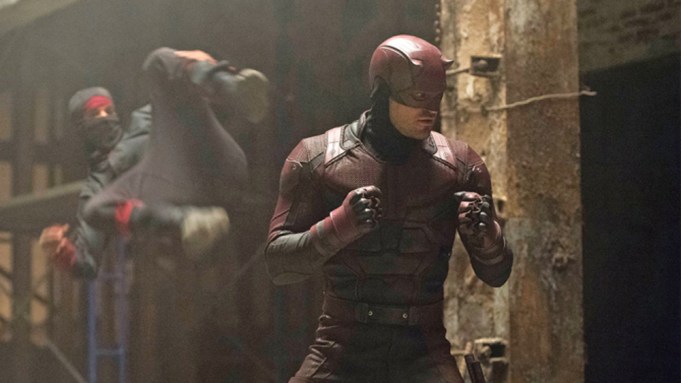 Netflix is ready to say goodbye to Matt Murdock.

The streaming service has canceled “Daredevil” after three seasons, Variety has learned. The superhero action-drama debuted its third season in October.

“Marvel’s Daredevil will not return for a fourth season on Netflix. We are tremendously proud of the show’s last and final season and although it’s painful for the fans, we feel it best to close this chapter on a high note,” a Netflix spokesperson said in a statement. “We’re thankful to showrunner Erik Oleson, the show’s writers, stellar crew and incredible cast including Charlie Cox as Daredevil himself, and we’re grateful to the fans who have supported the show over the years. While the series on Netflix has ended, the three existing seasons will remain on the service for years to come, while the Daredevil character will live on in future projects for Marvel.”

It’s the latest casualty in Netflix’s Defenders universe. The move to cancel the drama, produced by Marvel Television and ABC Studios, comes on the heels of Netflix pulling the plug on “Luke Cage,” and “Iron Fist,” related Marvel shows set in the same narrative world as “Daredevil.”

“Marvel is extremely grateful to the huge audience that loved Marvel’s Daredevil,” a Marvel TV spokesperson said in a statement. “From the moment of young Matt’s first act of heroism to the birth of Page, Murdock, & Nelson, it has been a unbelievable journey. We are incredibly proud of the amazing showrunners and writers starting with Drew Goddard and Steven DeKnight, Marco Ramirez and Doug Petrie and Erik Oleson, Charlie Cox, Deborah Ann Woll, Elden Henson, Vincent D’Onofrio and our casts who brought our characters to life with such excellence, and every one of the fantastic crews in NYC. We look forward to more adventures with the Man without Fear in the future.”

Netflix now has only two remaining live-action Marvel shows from the Defenders family — “Jessica Jones” and “The Punisher.” The cancellations have come as Disney preps its own streaming service, and has begun to pull back rights to film and television projects licensed to Netflix.