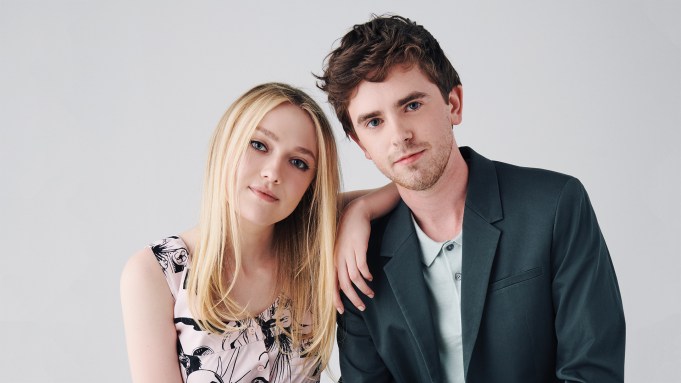 Freddie Highmore: Was there a moment where you thought, “This is what I want to do when I’m older”?

Dakota Fanning: My mom wanted me to be a tennis player. I come from a full athletics family. So this was the last thing on anyone’s radar for what they wanted me to be.

Highmore: I feel like I was probably lucky — or I’ve always thought — growing up in London and being somewhat removed from L.A. I guess it’s more impressive that you’ve managed to stay so grounded, whereas I had the return to what I thought of as normality.

Fanning: Even though I feel like I did grow up in Los Angeles, I’m from Georgia originally. And my family is very traditional and Southern. So even though I grew up in L.A., I grew up almost in Georgia, too, in my household. My mom managed to give me a very kind of stable, grounded life.

Highmore: You just directed a short film, and I was lucky to direct on “Bates Motel,” and this season I’m going to do that again. It feels like there’s a similar path for our futures in that way — of a desire to do something more than acting.

Fanning: Directing for me felt like the natural next step. I loved doing it so much. And it challenged me in a way that I hadn’t experienced in a while. Because as much as you get challenged with different roles or different films that you’re in, we kind of know what it means to be an actor on set. I feel pushed to a certain extent, but I also feel very comfortable. So directing ripped me out of my comfort zone, threw me in the middle of a desert with no water. It was terrifying. And it was actually really cool to feel that.

Highmore: I guess I was lucky to do it within that bubble. It came out of a natural desire for me, after being on “Bates Motel” for a few years, to want to contribute beyond what I was a part of. It seemed weird to go away from putting so much in for five months and not have anything to do with that process in between.

Fanning: It’s also wanting to exert a little bit of control too. Not in a bad way but just as an actor you …

Highmore: … Plan to take over the world.

Fanning: I never know how to answer, “How do you plan to transition from child to an adult?” I don’t know. I think it will just happen one day. And of course, there was a certain amount of thought that would go into the roles that you choose during that time, ’cause I never wanted to seem like I was trying to grow up too fast. I think that would drive you crazy if you’re constantly being strategic about those choices and like, “Well, people will finally see me as a 17-year-old if I do this part.” That’s not the reason you should be making choices. You should do a character just because you love it. The character that I played in “The Alienist,” I have no idea how old she is.
Highmore And how has that experience been?

Fanning: It’s been one of the greatest experiences of my life. I really do feel that way, personally and professionally. The character that I get to play was kind of another step for me, I think. She’s a period character — it’s set in 1896 — but she’s one of the most feminist characters I’ve ever played, in a time that didn’t really support that. And I’m upset that Shaun Murphy’s not a real person that I can meet. I think when an actor can make that happen for the audience, it’s such a special thing.

Highmore: I think there’s a hopeful and optimistic side to him that’s connected with people. And he’s someone that you can root for. And in a time when there’s so much negativity that’s so easy to come by, what I loved about him was his refreshing honesty and the way that he can be upbeat and cheery and reminding us that there is some good in humanity.
And it was a nice transition from “Bates Motel.”

I think he’s also the most complex character that I’ve ever gotten to play. It was exciting to take on that challenge and the research that was required in terms of the autism side of him. The one thing that’s nice about being on the show is definitely the scrubs. People always say, “Is it hard being on a medical show?” I guess there’s the jargon and the props, but at the end of the day you’re kind of just going around in pajamas.