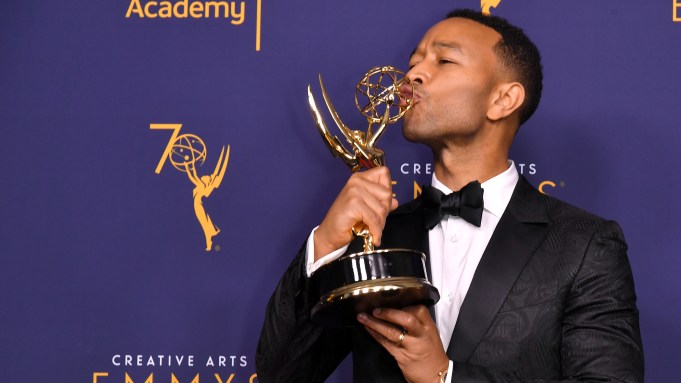 Sunday’s ceremony completes the Television Academy’s two-night presentation of awards in 96 categories. HBO’s “Game of Thrones,” with seven trophies, and FX’s “The Assassination of Gianni Versace: American Crime Story,” with four, were the big winners at the close of Saturday’s ceremony. Over the course of the two nights, “Thrones” and “Saturday Night Live” topped the list of programs with the most wins, with seven awards each.

Lydia Tenaglia, exec producer of “Parts Unknown” and a longtime collaborator with Bourdain, broke up on stage as she accepting Bourdain’s win for writing for a non-fiction program. She described her feeling of “tremendous bittersweetness,” noting that Bourdain had been nommed for his writing in the past but never won. “He’s off on a journey to parts unknown,” she said. “We wish we could be there to shoot that journey with him. I think he would have written the hell out of that episode.”

Neil Meron, Zadan’s longtime producing partner, was also emotional as he accepted the variety special trophy, the last award presented of the night. “This is for Craig,” Meron said. Keeping musical theater alive and well as his “mission,” Meron added. “Tonight he is acknowledged for achieving that goal.”

“Saturday Night Live” picked up six wins on Sunday, bringing its Creative Arts total to seven after Tiffany Haddish prevailed for guest actress in a comedy series for her hosting stint last season.

Among networks, HBO has a narrow lead with 17 total wins coming out of Creative Arts Awards. Netflix is right behind with 16, followed by NBC (15), CNN (8) and FX Networks (7).

Judd Apatow took home his first Emmy since 1993 with his HBO production “The Zen Diaries of Garry Shandling,” which won for documentary special.

Highlights from this weekend’s Creative Arts Awards ceremonies will air Sept. 15 as a special on FXX. The remaining kudos will be handed out Sept. 17 in a ceremony to be telecast live on NBC.

Cinematography for a reality program: “Life Below Zero”

Hairstyling for a multi-camera series or special: “RuPaul’s Drag Race”

Creative achievement in interactive media within a scripted program: “Conan Without Borders”

Choreography: Mandy Moore, “So You Think You Can Dance”

Cinematography for a non-fiction program: “Jane”