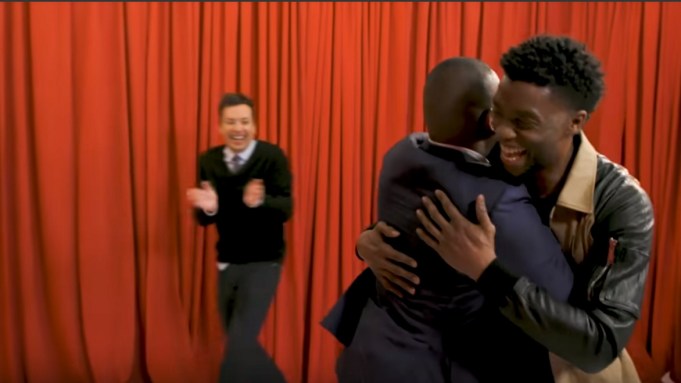 On Wednesday night’s “Tonight Show Starring Jimmy Fallon,” select “Black Panther” fans got a little more than they bargained for when Chadwick Boseman surprised them on set.

The fans were told they had been chosen to film a video message to Boseman about what “Black Panther” means to them — little did they know, Boseman was behind a curtain with Fallon, watching the whole thing.

After the fans had recorded a portion of their message, Boseman would step out from behind the curtain, sometimes with some direction related to the filming — “I think there’s something wrong with your microphone” — and many of the fans screamed in surprise.

When one man got over the shock, he greeted the “Black Panther” star with the Wakanda salute of crossed arms over his chest and said, “My king! My king!”

One fan jokingly thanked Boseman for wearing the Black Panther suit for most of the movie, because “when your chest was out, [my girlfriend] was getting a little excited, and I felt insecure, so thank you for that.”

Another young fan, whose mother had said his life had been defined by Barack Obama and now Black Panther, seemed in shock, looking back and forth from Fallon to Boseman and barely saying a word.