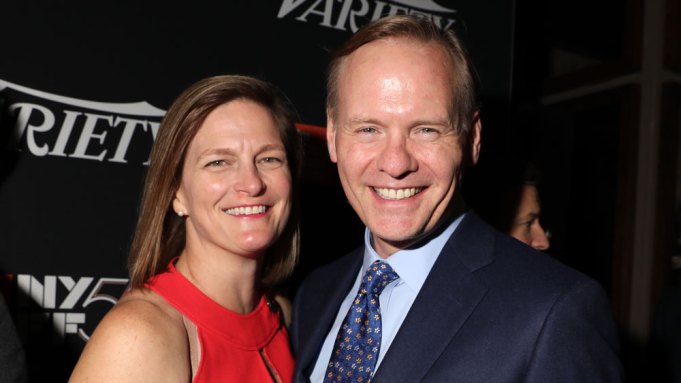 “CBS This Morning” co-host John Dickerson covers the news at the crack of dawn every morning, and yet, he still made time to discuss headlines late Wednesday evening.

“It’s past my bedtime, of course,” Dickerson, who wakes up at 4 a.m. during the week, quipped at Variety‘s annual New York party, where he was one of 50 honorees to make this year’s New Power of New York list, out in this week’s issue.

Dickerson said the early wake-up call is hardly the hardest part of his job, given the 24/7 news cycle, especially during Donald Trump’s presidency.

“The news cycle comes at you like a freight train,” Dickerson said, speaking to Variety at the Wednesday night event, held at Atlantic Grill in Midtown Manhattan. “And then you have to decide what to do with it and what are we missing that’s important that’s getting missed by the insanity in Washington, and then to have the right tone because you’re dealing with this frantic rush of news, but then you have to be there for people and make it all make sense and put it all into context and not be frantic yourself — so the wake-up time is easy.”

Dickerson joined “CBS This Morning” as a full time co-host, alongside Gayle King and Norah O’Donnell, in January, following Charlie Rose’s termination after numerous sexual harassment claims against the journalist surfaced in November 2017. This week, Bianna Golodryga was added as a fourth co-host to the CBS morning show.

“It was hard because a lot of us were dear friends of Charlie’s and it was a big blow to all of us,” Dickerson said, when asked about filling Rose’s vacant seat at the anchor desk.

“But I think the way the show has reacted is that every day the news cycle is still there, whether we want it to be or not,” Dickerson continued, “And we have to do our job, so I think everybody knows exactly what the mission is and gets up every morning and says, ‘How do we tell people what the most important things are? How do we tell good stories?’ That really focuses the mind pretty quickly.”

Ten months into his new gig, Dickerson has been adjusting well to the morning show, and the former “Face the Nation” anchor admits he’s enjoying exploring more than just politics.

“I love it because we get to still do politics and news,” he says, “But there’s more to life than politics. There’s books, there’s art, there’s science, there’s business, and I get to play in all of it. With Gayle and Norah and now Bianna, it’s like you get to have a chat with your friends about it … the variety is what’s really fun.”

Not missing the chance to weigh in on a bit of politics, Dickerson offered up his opinion on President Trump’s recent comments mocking Christine Blasey Ford’s sexual assault testimony against Judge Brett Kavanaugh, who is currently under an FBI investigation.

“Well, you know, it is possible to think that there is not enough evidence to keep Judge Kavanaugh from the Supreme Court, and yet, recognize the humanity of Dr. Ford. And a lot of Republicans who are going to vote for Brett Kavanaugh, nevertheless, recognize the humanity of somebody who clearly went though something,” Dickerson explained. “It was striking to see the president make fun of her on a human level when that’s really not been anybody else’s reaction, so just from a human standpoint, that is very surprising, and then from a political standpoint, usually before an election, you don’t try to do anything to alienate suburban college-educated women who are an important constituency, and you would think that making fun of Dr. Ford would be a counter to his political interest, too — but, it’s not the first time the president has surprised us.”