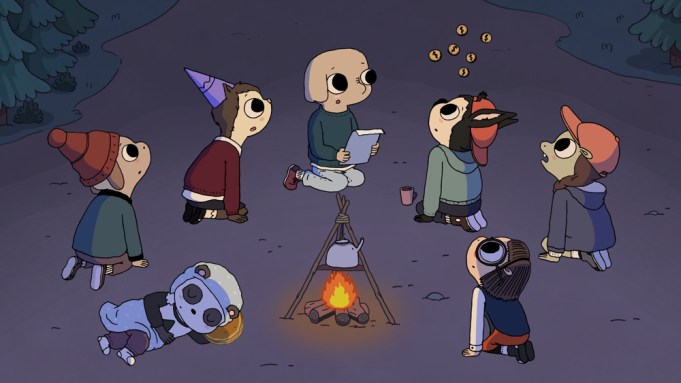 British animator Julia Pott, the creator of Cartoon Network’s new children’s series “Summer Camp Island,” said it spoke “to people who are craving gentleness,” during a presentation of the show Saturday at MipJunior in Cannes, France.

Pott compared her animated series, which follows two friends at a magical sleepaway camp, to “Gilmore Girls.” “Nothing bad is ever going to happen in that show and if you really just need to be soothed you can watch it, and that is what we want with this show… anyone that wants to feel soothed, it is for them.” She added: “There is darker stuff in there but it is in a little cute package.”

Rob Sorcher, chief content officer at Cartoon Network, who led the MipJunior session, incorporating the European premiere of one of the show’s episodes, said it was “pretty rare” to come across a property that has a “fully developed world and that has a gifted and clear voice behind it.”

The series was developed out of Cartoon Network’s Artists Program, which “specializes in curating distinct and diverse artists, most of whom have never run a show,” Sorcher said. Many of the participants have never worked on a show at all, or only for a short time on one show. It started as an experimental program to bring in new voices but has “become the main pipeline of television development for [Cartoon Network], and has spawned 11 television series to date,” Sorcher explained.

Referring to the storytelling elements of “Summer Camp Island,” Pott said that “every inspiration came from my childhood,” and she paid tribute to shows like “Buffy the Vampire Slayer” and “Sabrina, the Teenage Witch” that she watched as a kid. Pott added: “A lot of kids think that there is a secret, magical layer to everything: There’s definitely a monster under your bed, you will fall into quicksand and die, there are ghosts everywhere, and magic and witches – and your parents just aren’t telling you about it. And I really like that you are in tune with the spooky and eager to believe all of that stuff.”

Pott made the jump from making short art films when she was a freelancer, such as “Belly” and “The Event” – which, she said, she made “entirely by myself alone in my pajamas in my bedroom” – to running a $30 million enterprise, according to Sorcher’s figures. This leap, which came via a period working on Cartoon Network’s multi Emmy winner “Adventure Time,” was not without its traumas. “When [“Summer Camp Island”] got picked up it was so much to take in. Being in charge of a bunch people was really overwhelming and I had a lot of panic attacks,” Pott said.

The hardest thing to deal with was her own expectations. “When you are starting to work on something that’s so big, that potentially a lot of people will see, you can’t help but beat yourself up about everything that might be going wrong, or if there is an episode that you don’t entirely love, you are like, ‘This is a disaster. This is the end of the world.’ ”

Pott said that “Adventure Time” showrunner Adam Muto gave her a good piece of advice. “Not every episode is your episode,” he told her. “You have to learn how to let it go if it is not working out. Someone will connects with this.” Pendleton Ward, creator of “Adventure Time,” also guided her. He said: “If there is one thing in the episode that you think is funny that is a victory. Just focus on that. Focus on the good stuff, and don’t destroy yourself with the stuff that you don’t think is perfect, because it is never going to be perfect – it is television.”

There was one piece of advice – from Sorcher himself – that Pott opted to ignore. He warned her against casting real children, which she wanted to do, inspired by the animated series “Peanuts.” “What is nice about our show in general is that it is very sincere and it is supposed to be as real as possible… We want it to seem like they could be real kids talking to each other, and you just can’t get that with someone pretending to be a kid,” Pott said. “And the way that they say stuff is so surprisingly funny. And they are coming from the same emotion that you are exploring because they are still there… Working with kids, there is an energy there you just don’t get from someone pretending to be a kid.”

The child who plays the part of Pajamas in the episode that was screened at MipJunior, Naomie, was just 3 years old. She was “arguable the best actress on our show,” and “rewrites stuff that she says doesn’t make sense,” Pott said.