Burt Reynolds, Star of ‘Deliverance,’ ‘Smokey and the Bandit,’ Dies at 82 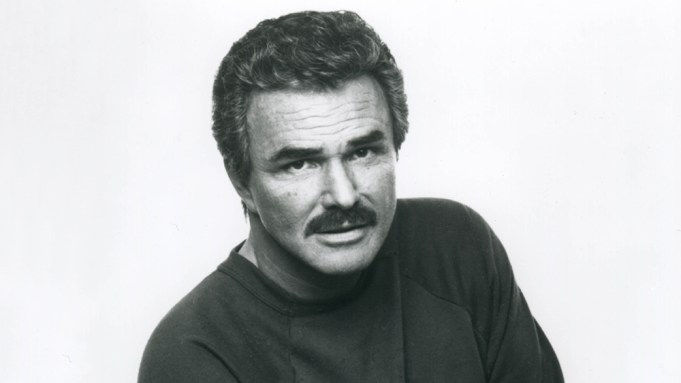 Burt Reynolds, one of Hollywood’s most popular leading men during the ’70s and early ’80s with such films as “Deliverance,” “Smokey and the Bandit,” “The Longest Yard” and “Semi-Tough,” has died. His rep confirmed that he died Thursday in a Jupiter, Fla. hospital. He was 82.

He later earned an Oscar nomination as best supporting actor in Paul Thomas Anderson’s ode to skin flicks, “Boogie Nights.” He had not yet shot his planned role in Quentin Tarantino’s “Once Upon a Time in Hollywood.”

His niece Nancy Lee Hess said in a statement, “He has had health issues, however, this was totally unexpected. He was tough. Anyone who breaks their tail bone on a river and finishes the movie is tough. And that’s who he was. My uncle was looking forward to working with Quentin Tarantino, and the amazing cast that was assembled.”

Reynolds’ appeal lay in his post-modern macho posture undercut by a wry self-awareness, which he used to good effect in comedies as well as action films. For a period during the ’70s he was the nation’s top box office draw. But after one too many bad movies, his popularity waned. He returned to television, where he’d gotten his start, mostly in Westerns, and produced his own sitcom, “Evening Shade,” which brought him an Emmy.

In his colorful career Reynolds secured more than his share of both good and bad press. He could be affable with the media but at times downright hostile. Despite his many high-profile roles, the ones he is said to have turned down were even bigger: He was offered the roles of James Bond, Han Solo, the Richard Gere role in “Pretty Woman” and the Jack Nicholson role in “One Flew Over the Cuckoo’s Nest.”

In the early 1970s, Reynolds was a veteran of TV and film who spurred the curiosity of Hollywood producers through his amusing appearances on latenight talkshows, as well as the hyped publicity stunt of appearing as the first celebrity male-nude centerfold in a 1972 issue of Cosmopolitan.

He was thus cast in his first A-title role, in John Boorman’s “Deliverance,” one of the most popular and well received films of 1972 (several major actors, including Marlon Brando, had turned the role down before it was offered to Reynolds). The same year Woody Allen cast him in a small comedic role in his film “Everything You Always Wanted to Know About Sex.”

He solidified his position as a rising film star with 1974 prison football drama “The Longest Yard.” In 1977 he starred with Sally Field and Jackie Gleason in the comedy programmer “Smokey and the Bandit,” which proved to be his most successful undertaking ever and was followed by the inevitable sequels. That same year he was again on the gridiron in the hit comedy “Semi-Tough.”

Reynolds made his directing debut with 1976 action film “Gator” and 1978’s black comedy “The End.”

Such was his popularity in box office polls during this period that he managed to weather high-profile disasters like the musical “At Long Last Love,” “Lucky Lady” and “Nickelodeon.”

Other films during the 1970s included “W.W. and the Dixie Dancekings,” “Fuzz,” “Shamus,” “The Man Who Loved Cat Dancing,” “White Lightning,” “Hustle” and “Silent Movie.”

He brought the decade to a successful close with the action film “Hooper” and the urbane comedy “Starting Over” and began the ’80s with a popular sequel to “Smokey.” Over the next few years, there were hits like “Best Little Whorehouse in Texas,” “Best Friends” and “City Heat,” as well as audience-friendly fare like “Rough Cut,” “Sharky’s Machine” (which he also directed) and “Cannonball Run.” Blake Edwards cast him in the lead of the American remake of “The Man Who Loved Women” in 1983.

But the poorly received films like “Stroker Ace,” “Cannonball Run II,” “Rent-a-Cop” and “Heat” took his career in a downward direction. Along the way he turned down such potentially career-making roles as the ex-astronaut in “Terms of Endearment,” for which Jack Nicholson won an Oscar.

Reynolds retreated to his adopted home of Florida and opened the Jupiter Theater, a popular spot with local audiences where he directed several productions and appeared in a couple as well. He endorsed the Florida Citrus Commission and Quaker State Oil, then returned to television in a dozen TV movies playing B.L. Stryker. After marrying television actress Loni Anderson, Reynolds decided to produce and star in the sitcom “Evening Shade,” which ran on CBS from 1990-94. Along the way he picked up an Emmy as best actor in a comedy series.

Burton Leon Reynolds Jr. was born in Waycross, Ga., and attended Florida State University for two years on a football scholarship. But his promising career as a running back was cut short by a knee injury suffered in a car accident. Reynolds turned his attention to acting, moving to New York, where he struggled for several years until he landed a role in a revival of “Mr. Roberts” starring Charlton Heston in 1956. He made his Broadway debut in the short-lived “Look We’ve Come Through” and began accumulating guest shots on television in programs such as “Alfred Hitchcock Presents,” “Zane Grey Theater,” “Route 66,” “Perry Mason” and “The Twilight Zone.”

Reynolds landed several series starring roles, mostly in Westerns, starting with “Riverboat” in 1959. He appeared for three seasons as a Native American on the long-running “Gunsmoke” in the mid-’60s, then moved over to the cop/detective genre as the lead in “Hawk” (1966) and “Dan August” (1970-71). He was simultaneously making movies, starting with “Armored Command” and “Angel Baby” in 1961. But his ’60s output, which included “Navajo Joe,” “100 Rifles” and “Sam Whiskey,” did little to further his feature film aspirations.

Reynolds’ assured performance in the controversial and violent “Deliverance” started him on a decade or more of enormous success.

But after riding the wave of popularity, a messy, high-profile divorce from and custody battle with Anderson in the early 1990s and a tell-almost-all autobiography, “My Life,” in 1994 cast him in a negative light, not helped by his understandable, but often irritable attitude toward the press, which was always keenly interested in his love life.

Comeback attempts in movies including “Switching Channels,” “Cop and a Half,” “The Man From Left Field” (which he also directed) and “Striptease” were failures. By the mid-’90s the former $1 million-plus player’s services could be had for as little as $100,000 (which he received for “Striptease”).

After losing the Oscar he continued to work regularly in indifferent projects like “The Crew,” “Mystery, Alaska” and “Universal Soldier III.” He was second billed in Renny Harlin’s racecar actioner “Driven,” starring Sylvester Stallone; played the coach in the comedic 2005 remake of “The Longest Yard” that starred Adam Sandler; and played Boss Hogg in the feature adaptation of “The Dukes of Hazzard,” also in 2005, but other film work was mostly in lower-profile material.

The actor also kept busy on television, with guest appearances in “The X-Files,” “Ed,” “My Name Is Earl” and “Burn Notice” and voicework on “Robot Chicken,” “Duck Dodgers,” “American Dad” and “Archer.”

Most recently, he made an impression earlier in 2018 in Adam Rifkin’s “The Last Movie Star,” essentially playing himself as a star confronting mortality.

In September 2015 Reynolds was honored by the Stuntmen’s Association of Motion Pictures with the organization’s Richard “Diamond” Farnsworth Award.

Reynolds was married and divorced twice, first in the 1960s to “Laugh-In” comedienne Judy Carne and then to Anderson.

He is survived by adopted son Quinton from his second marriage.