‘Brooklyn Nine-Nine’ Could Continue on Hulu After Fox Cancellation 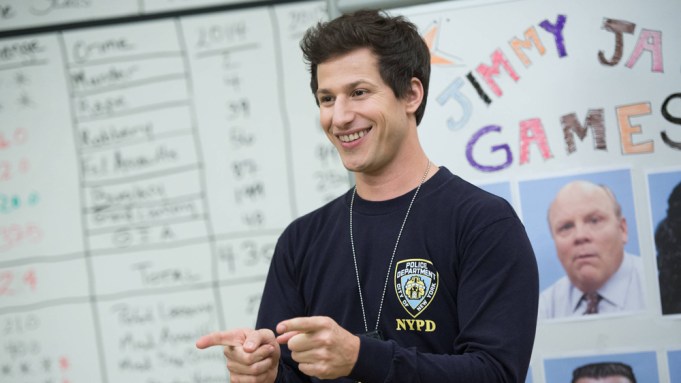 Sources tell Variety that there are currently discussions to continue the ensemble comedy at Hulu now that Fox has pulled the plug on the series after five seasons on Fox. No deal is currently in place, but both Hulu and producer Universal Television are said to be interested in keeping the show going.

Hulu currently has the SVOD rights to “Brooklyn Nine-Nine.” The streaming service also previously revived “The Mindy Project,” another Fox comedy produced by Universal, for three seasons after it was initially canceled in 2015. The final season of that show aired last year. Picking up “Brooklyn Nine-Nine” would also continue Hulu’s strong run of late, which began when they scored major critical and awards success with their adaptation of “The Handmaid’s Tale.”

Fans of “Brooklyn Nine-Nine” were stunned on Thursday when Fox announced they were cancelling it along with fellow comedies “The Mick” and “The Last Man on Earth.” There has been a large online push to save the show, with celebrity fans like Lin-Manuel Miranda leading the charge by sharing hashtags like #SaveB99 and #RenewB99. Mark Hamill also expressed his dismay at the show’s cancellation in a tweet on Thursday.

From writers, creators and executive producers Dan Goor and Michael Schur, the series originally premiered in September 2013 and earlier this year hit its 99th and (the more traditional milestone of) 100th episodes.