Borat Gets Out the Vote for ‘Premier’ Trump on ‘Jimmy Kimmel Live!’ 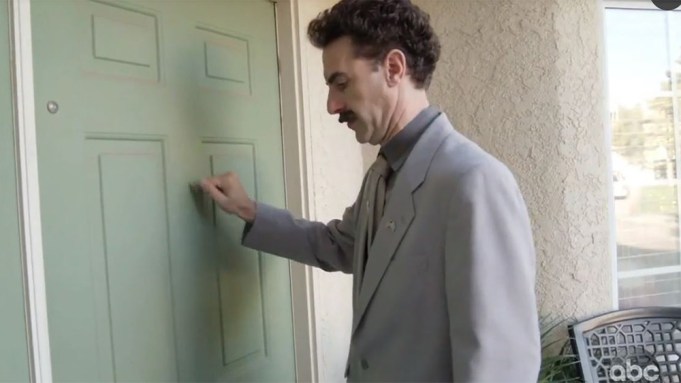 Sacha Baron Cohen’s infamous Borat made his return Tuesday night in honor of the historic 2018 midterms, visiting a Los Angeles neighborhood for a segment on “Jimmy Kimmel Live!”

“Russia interfere with the presidential election,” Borat said in an introduction. “But now, all eyes are on them. So, it’s up to Kazakhstan to swing the midterms for Premier Trump. I come to California to do election tampering.”

At his first house, Borat was confused by the woman who answered the door’s lifelong ability to vote.

“It is not against the law?” he queried, to which she said no.

“Hmm,” he said, with a disapproving look.

The woman seemed to be amenable to Borat’s stance that the Trump administration’s storage of migrant children in cages wasn’t that bad.

“So many came over here, they had to be somewhere,” she said.

At the second house, Borat asked the man who answered the door what was wrong with being a racist, as he asserted Trump is.

“I’m a racist, it is nice,” said Borat. After a few more exchanges, Borat asked to use the man’s bathroom, from which he shortly appeared wearing only a towel around his waist and socks, as well as holding a toothbrush.

From there, Borat made a trip to a polling station. “It is good to see democracy in action,” he explained, with a conspiratorial wink. “Not!”

He then put his plan to stop Jews from voting for Democrats into action: throwing strips of bacon on the sidewalk in front of them while chanting, “You shall not pass.”