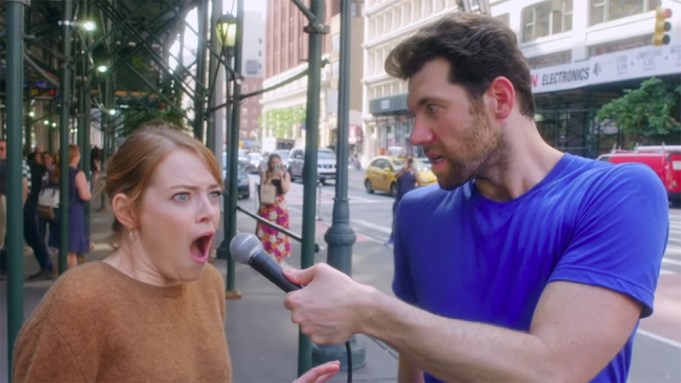 “Miss, our democracy is crumbling, would you like to talk to Emma Stone?” asks Billy Eichner. With that, Eichner and Stone kick off the first of eight short-form episodes of “Billy on the Street.”

In his trademark high-energy style, Eichner will bombard unsuspecting pedestrians with questions on the streets of New York City, with a celebrity sidekick in tow. In the recent installment, released Thursday, Eichner asks each person if they think Stone should join Instagram, with the Oscar-winning actress right beside him. Audiences get to see people’s surprised reactions, as well as funny quips by Eichner (when a woman says Stone is too good for horror movies, he snaps back, “Tell that to Emily Blunt!”).

The series aired five seasons as a half-hour show, with the first three seasons on Fuse and the final two airing on truTV. It was nominated for two Emmy Awards, including one for best variety/sketch series in 2017. It was announced last year that the series was leaving truTV, with the network saying in a statement that it’s “deceptively time-consuming to make and scheduling was increasingly difficult.” Since the fifth season of the show, Eichner has nabbed high-profile roles in projects like Disney’s upcoming remake of “The Lion King” and on FX’s “American Horror Story.” He is also preparing his first comedy special currently in development for Netflix.