The Most Memorable Moments From Anthony Bourdain’s Shows 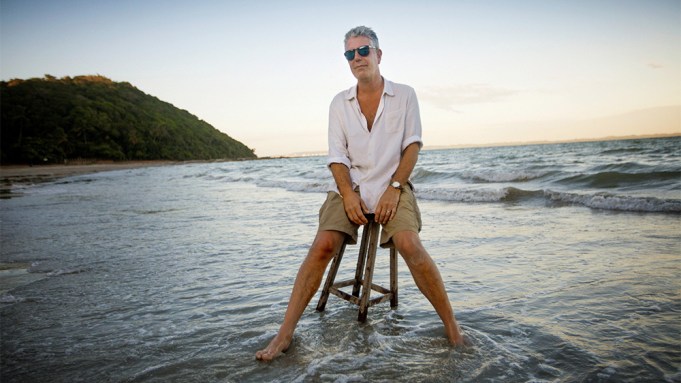 Following the news of Anthony Bourdain’s death on Friday, his 16 years spent introducing audiences to food around the world is being celebrated, including his work on “A Cook’s Tour,” “No Reservations,” “The Layover,” and most recently, “Parts Unknown.”

CNN confirmed that Bourdain died by suicide while he was in France filming an upcoming episode of his CNN series. He was 61.

After building a career as a chef in Manhattan, he entered the spotlight with his 2000 bestseller “Kitchen Confidential: Adventures in the Culinary Underbelly,” which he parlayed into a gig with Food Network hosting “A Cook’s Tour.” Later, he moved onto the Travel Channel to host “No Reservations” and “The Layover,” which aired from 2005 to 2013, and started with “Parts Unknown” on CNN in 2013. The show is currently airing its 11th season.

Across his many years of eating his way around the world, dining with figures like Barack Obama and Bill Murray and tackling heavier topics like America’s heroin epidemic, Bourdain became a staple on television. Here are 10 of the best moments from Bourdain’s TV career:

Eating through Vegas with Michael Ruhlman

In the first season of “No Reservations,” which started airing in 2005, Bourdain road-tripped to Las Vegas with Michael Ruhlman to explore food from casino fare to local joints, and visited the Neon Museum.

In July of 2006, Bourdain traveled to Beirut for “No Reservations,” saying in a clip, “we went to Lebanon looking to make a happy food and travel show.” Quickly, that plan was put into question when the chef and his crew found themselves in the start of the Lebanon War, with gunfire and the airport they had flown into bombed. After nine days of hiding out, they were able to get out by boat and assistance from Marines.

Working the line with Eric Ripert at Les Halles

In a 2008 episode of “No Reservations,” Bourdain returned to his chef roots, working on the line at New York City Restaurant Brasserie Les Halles. The French restaurant was where Bourdain worked as an executive chef, and he went back, along with friend chef Eric Ripert manning the grill, to prove he still had it.

Stopping by a strip club with Alton Brown

On “The Layover” in 2013, Bourdain went for a deep dive on the Atlanta food scene, and ended the night at strip club Clermont Lounge with Alton Brown, which he said “should be a national landmark.” The two chefs take shots out of plastic cups and meet up with “Blondie,” the unofficial mayor of Atlanta.

Eating at the world’s best restaurant

For Season 2 of “Parts Unknown” in 2013, Bourdain visited Denmark to have a meal at Noma, a Copenhagen establishment that is considered the best restaurant in the world. He interviewed Noma’s owner, while also exploring the diverse menu, which ranges from simple dishes to edible flowers and foraged beach mustard.

Experiencing Iran for the first time

Bourdain went to Iran for a 2014 episode of “Parts Unknown,” where he learned the country was “neither East nor West, but always somewhere in the middle.” He went for lunch at the home of an Iranian art gallery owner, where he was served a traditional home-cooked meal and admitted Iran was not what he expected.

In a 2014 episode of “Parts Unknown,” Bourdain explored the nightlife scene by drinking, indulging in late-night street food, and even getting a tattoo. The “drunken noodles” he tried were so spicy that he experiences “an ice cream headache, but it’s like a pepper headache.”

Going down south with Bill Murray

On “Parts Unknown” in 2015, Bourdain explored seafood in Charleston, S.C., with Bill Murray and chef Sean Brock. The two discussed Murray’s transition from life in New York to the south and exploring southern cuisine, and Murray said he’s learned that “the standard of food here is so high.”

Bourdain took on a more serious topic in a 2015 episode of “Parts Unknown,” heading north to Massachusetts where he dove into the region’s struggles with a heroin epidemic. As a former heroin addict, the storyline took on a personal meaning for the chef, as he traced his own path to the drug while also dealing with its prevalence in small-town America.

Noodle slurping with Obama in Hanoi

In 2016, President Obama joined Bourdain for an episode of “Parts Unknown,” where the two tried out local delicacies in Hanoi, the capital of Vietnam. As Obama questioned how best to eat the traditional noodle dish politely, Bourdain encouraged him to embrace the slurping. The chef went on to praise his technique, saying in the clip, “It takes some skills, by the way, to handle these sticky, cold noodles. But whatever your opinion of the man, the president has those skills.”