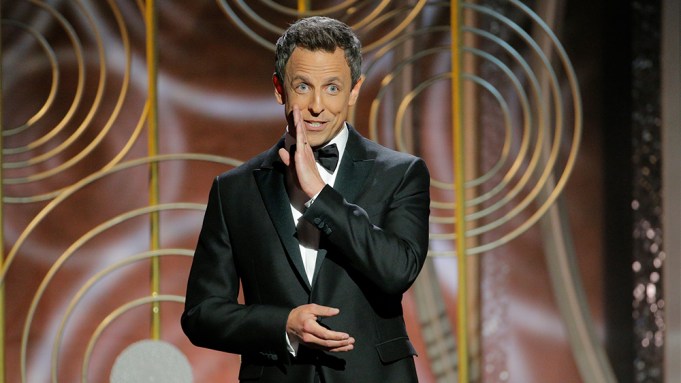 Seth Meyers hosted the 75th annual Golden Globes for the first time on Sunday, and he didn’t back away from Hollywood’s recent sexual harassment allegations in his opening monologue.

While the host also included serious moments in his monologue, addressing the Time’s Up initiative and praising women who had led the charge against sexual harassment, Meyer’s also included a number of timely zingers.

“This was the year of big little lies and get out — and also television series ‘Big Little Lies’ and the movie ‘Get Out.’”

“There’s a new era underway, and I can tell because it’s been years since a white man has been this nervous in Hollywood. For the male nominees in the room tonight, this will be the first time in three months it won’t be terrifying to hear your name read out loud.”

“A string of three words that could not be better designed to infuriate our president — Hollywood Foreign Press Association . The only name that could make his angrier is the ‘Hillary Mexico Salad Association.'”

“Time to address the elephant not in the room: Harvey Weinstein isn’t here tonight because, well, I’ve heard crazy he’s difficult to work with. Don’t worry, he’ll be back in 20 years when he’s the first person ever booed during the In Memoriam.”

“They’re going to do another season of ‘House of Cards.’ Is Christopher Plummer available for that too? I hope he can do a southern accent because Kevin Spacey sure couldn’t.”

“‘The Shape of Water’ received the most nominations of any film this year. When I first heard about a film where a woman falls in love with a hideous monster, I thought it was a Woody Allen movie.”

In a mimic of his “Late Night” bit — Jokes Seth Can’t Tell — as a straight, white man, Meyers teamed up with Eicher to set up this joke: “‘Call Me by Your Name’ is nominated for best motion picture. It’s a gay coming of age film.” Eichner: “Said Kevin Spacey: ‘You lost me at ‘of age.'”